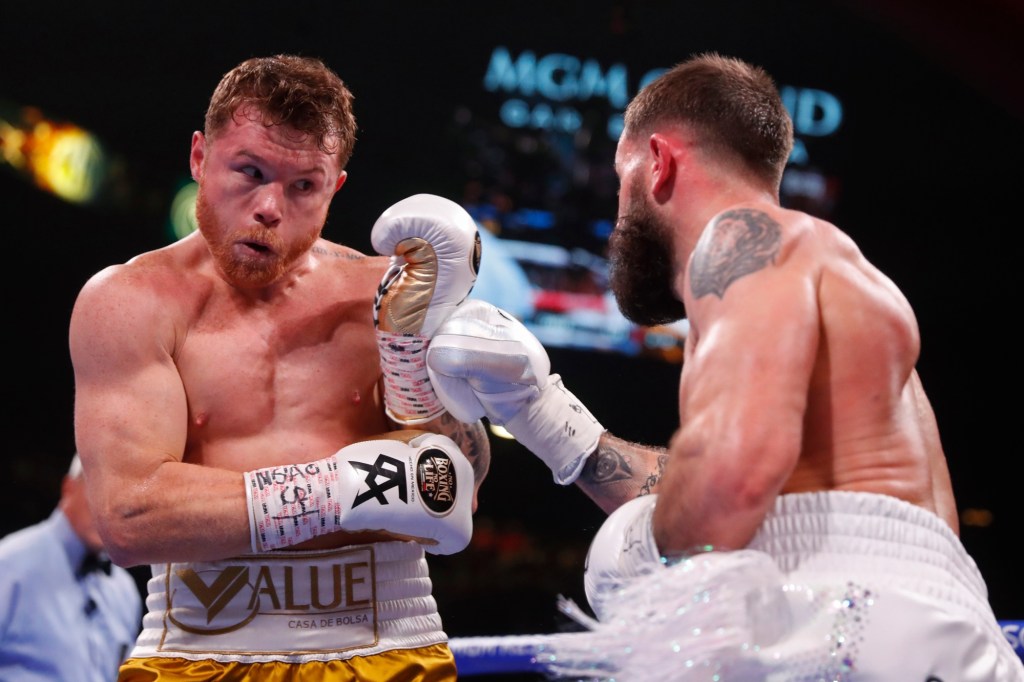 LAS VEGAS — He knows boxing history, he yearns to add to its traditions, and yet Canelo Alvarez has no time for the one thing that has defined nearly every great fighter before him.

He’s not into rematches.

It isn’t as much of a personal preference as it is a necessary corollary.  A rematch requires doubt. It cleans up something unresolved. Canelo had to fight Gennady Golovkin twice to square account, at least to his satisfaction after their initial draw, and he was stubbornly reluctant to do that. Since then he has plowed through everyone else and left no doubt. Pete Carroll, circa 2005, would be proud of him.

On Saturday night Canelo lured a screeching throng of 16,586 to MGM Grand Garden Arena to watch him leave exclamation points instead of question marks. He knocked out Caleb Plant in the 11th round, and Plant observed the usual post-fight ritual for Alvarez’s opponents and paid a precautionary visit to the hospital. It gave Canelo a fourth belt in the super-middleweight division and, in case anybody was wondering who the modern-day King of Pop-Pop-Pop is, he wore a crown in the ring afterward.

A Canelo-Plant rematch would excite nobody. Same with Canelo-Billy Joe Saunders or Canelo-Callum Smith. He even ventured into the light-heavyweight division to destroy what was left of Sergey Kovalev, and nobody wants to see that either.

And yet Saturday night was compelling, if inevitable. Canelo has a knack for constructing a 12-round plan that holds up in the face of any difficulty. He isn’t afraid to lose an early round or two if he finds something that will sustain him late. In this case he didn’t always look comfortable against Plant’s jabs and movement, but he kept turning up the volume, judiciously, as the fight went on.

Plant did a nice job absorbing the big shots. It wasn’t a long-term solution.

Once Canelo has poked a hole in your boat, you’re joining the fishes in short order. Perhaps the last man who closed the show with such emphasis was Mike Tyson, who was sitting at ringside.

The first knockdown came after a left hook that crushed Plant’s right ear, followed by an uppercut that came from the general vicinity of hell. Plant went down and, in a testament to his healthy competitiveness and unhealthy judgment, decided to get up. If he was looking to return to Square One, Canelo circled it. He basically punched Plant all over the ring and finished him with three consecutive right hands, which sent down Plant and forced referee Russell Mora to bring out the hook.

Canelo landed 40 percent of his power shots, put nearly half of them on Plant’s body, and was defensively skilled enough to make Plant miss all but 22 percent of his jabs. The three judges had Canelo leading by six, four and two rounds when it ended, and the truth was probably in the middle of all that.

But Plant, despite his relative inexperience and his lack of a right hand, deserves more main events, and certainly is skillful enough to regain his IBF 168-pound belt whenever Canelo moves up or down.

“He was a difficult opponent for me,” Alvarez said. “He has a lot of ability and I respect him. We are both men at the end of the day. He was making it difficult but I followed the game plan that Eddy (trainer Reynoso) put out. I admit I was getting frustrated in the fifth round or so, but the second part of the fight was going to be different. And that’s all that matters, really.”

Plant and Canelo pushed the hype rituals to the breaking point, especially when Plant insulted Canelo’s mother, and the two went to fist city at a Beverly Hills press conference.

Afterward, they talked for a long time inside the ring and hugged warmly.

“He said he really wanted to get up and keep fighting, and I respect that,” Canelo said. “And he also apologized for the things that I said, and I said it was water under the bridge. I wish him well. He’s a great fighter.”

Who’s next? The next obvious fish in the barrel is David Benavidez, 24, who takes a 24-0 record with 21 knockouts into Saturday’s fight with Kyrone Davis in Phoenix. Benavidez is athletic and dangerous, and easily the most deserving super-middleweight to get an audience with The King. It might happen next May.

If so, Benavidez is advised to savor each moment of the all-inclusive package, even that mandatory stop at the hospital.

There is no follow-up visit.