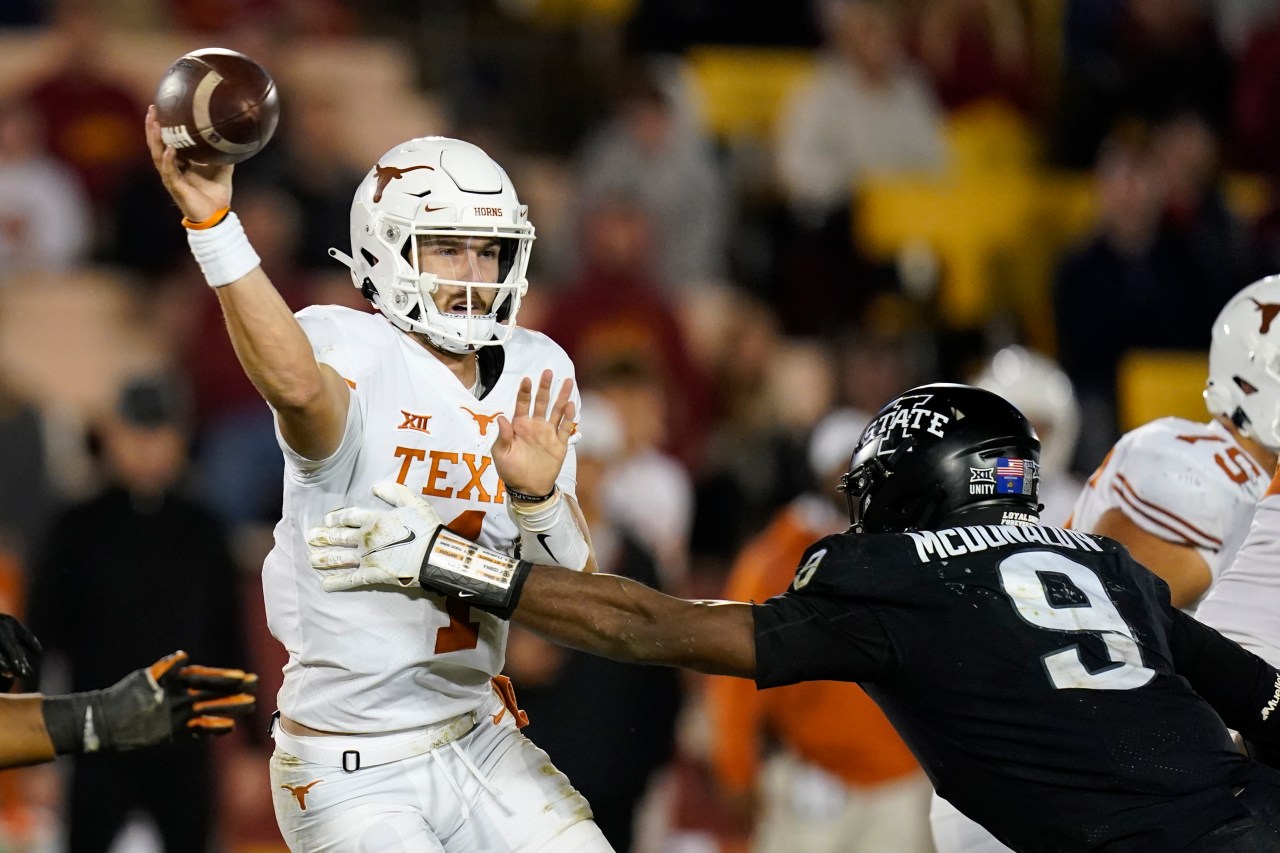 Texas led 7-3 at halftime before Iowa State reeled off 27 unanswered points for its 10th win in a row at home at Jack Trice Stadium. The Longhorns have lost four straight games for the first time since 2010, letting second half leads in each of those games disappear into failure.


BLOG: Texas loses 4 straight for first time since 2010 with loss to Iowa State

The Longhorns offense wasn’t right all night. Hudson Card replaced Casey Thompson late in the first quarter, leading Texas’ only scoring drive of the night. Texas just barely eclipsed 200 yards of offense during garbage time in the fourth quarter when the game was already well in hand.

Texas will host Kansas next Saturday at 6:30 p.m. at Royal-Texas Memorial Stadium. The Longhorns need two wins in its last three games to become bowl eligible.

“First of all, I thought our defense played pretty well here in the first half. Ultimately, we struggled all night offensively to generate anything consistently. The defense kind of wore out. Momentum swung in their favor and we could not get a first down. We didn’t coach well enough in this ball game clearly and we didn’t play well enough. They were the better team, they controlled the game. We have to find a way to get our players in position to perform when the ball kicks off…our inability to do that showed itself and we got beat. That’s unfortunate.”

On whether the team competed throughout the game

“I guess that’s your opinion, not mine. I feel like we battled our butt off for really the whole ballgame. It wasn’t about effort. That’s a good football team. We went into halftime with a lead…came out of the locker room…whether it was our inability to make adjustments or our inability to get them down on the ground or inability to get a first down…they controlled the second half.”

“I just felt like we needed a spark. We just weren’t in rhythm offensively at all, especially in the passing game. Hudson deserved the opportunity to go. Once we went to Hudson and we got going there late…my mindset was to let him play it out. It did cross my mind but ultimately stuck with Hudson.”

“I think it was a stinger issue that arose. We don’t have anything significant…exactly what it was.”

“We told them the exact play that was coming and it worked for them so that part is unfortunate.”

On why he removed Casey Thompson

“It wasn’t physical at all. I felt that his thumb was good…it hasn’t been 100% for the guy for sometime. It didn’t feel comfortable to me for whatever reason tonight with him. Sometimes you have to make the change to make a spark. Overall, this was not about Casey was the reason that we didn’t play well tonight. Obviously, the game plan wasn’t good enough to perform.”

“In the end, football really parallels life and…in life, sometimes you don’t get the breaks that go your way. You work hard and try to do the necessary things to put yourself in position to have success in life. Sometimes it doesn’t go your way. The one thing in life that can get you in trouble is…when you start to feel sorry for yourself. That’s a dangerous place to go. We don’t have time for feeling sorry for ourselves. This has been a long month of grueling losses and our guys continue to come back and fight back. I felt like in the second half tonight…it all added up for us. I felt for our team because that’s a lot to withstand. It wasn’t just about tonight’s game…this has been a month of tough losses that they’ve had to endure. Ultimately, it mounted on us late in the third quarter.”

“I was just trying to get him to settle his feet down and trust what he saw. When you have really good vision and you trust your reads, you get the ball out in a timely manner and it just wasn’t coming out in a timely manner. Needless to say, I think the experience for Hudson was good. We’ll reassess that position moving forward next week.”

Did Sarkisian think the team quit in the second half?

“No, not at all. I thought our guys continued to fight and I appreciated that because that’s hard. I felt like we stood tall and clearly we were getting nicked up and banged up and other guys stepped in and played. Ultimately, we got a couple stops in there. We just couldn’t generate enough offensively and ultimately that’s going to take a toll.”

What was Sarkisian’s message between the third and fourth quarter?