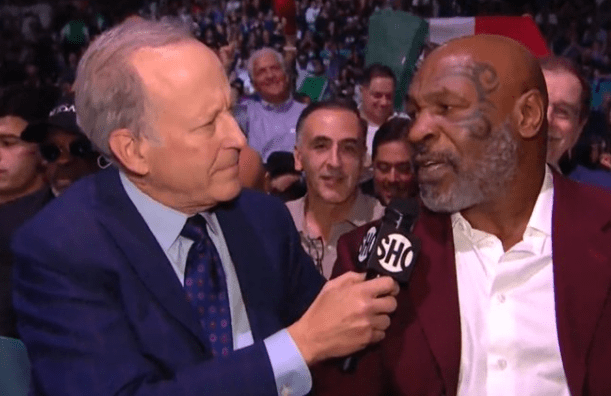 MIKE TYSON took his seat for the undisputed blockbuster between Canelo Alvarez and Caleb Plant – and confirmed he will box again in February.

Iron Mike was a fixture in Fight Week for the super-middleweight scrap, so it was no surprise to see him ringside in Las Vegas.

And while he watches the two boxers trade leather, he is itching to get back in the ring himself.

While being interviewed by Showtime, the 55-year-old said: “God willing I’ll fight again in February.”

SunSport exclusively revealed that was the former heavyweight champion’s plan – and he wants a ‘really stimulating opponent’.

He drew with fellow American icon Jones, 52, but insisted it was not the last boxing fans will see of him in a ring.

And in an exclusive interview with The Sun, Iron Mike opened up about who he could fight next, amid claims it could be either Logan or Jake Paul.

Tyson said: “I am going to have a return fight in February and we are pretty sceptical about the opponent, but it will be a really stimulating opponent.”

Tyson recently said he could KO 4-0 boxer Jake ‘so f***ing easy’ but would NEVER do so, as his family ‘love’ the social media influencer.

Older brother Logan, 26, however, who took Floyd Mayweather, 44, the distance in their exhibition in June, has welcomed a fight with Iron Mike.