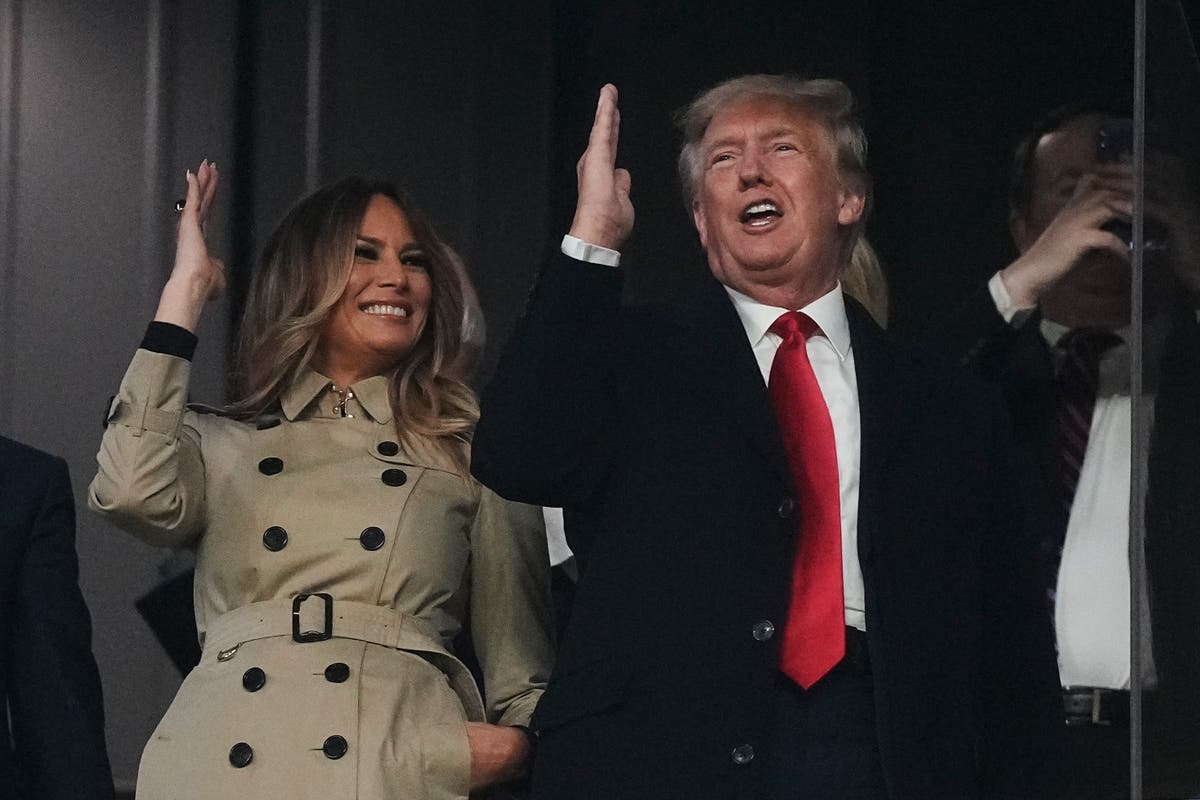 There could hardly be two more controversial topics than Donald Trump and the Atlanta Braves’ infamous fan “Tomahawk chop” – and the two collided Saturday night at the World Series for a perfect storm of outrage.

Former President Trump, attending Game 4 in Atlanta between the Braves and the Houston Astros, participated in the stadium-wide “chop,” which has been decried as “racist” and “dehumanizing” towards indigenous people since it became popular at games almost exactly 30 years ago.

But Mr Trump’s hand gestures – performed simultaneously by his wife, Melania, who was at his side – were not the only eyebrow-raising elements of his attendance at the game (which the Braves won).

Trump claimed he was invited. Braves officials said they were caught off guard.

“Looking forward to being at the World Series in Atlanta tonight. Thank you to the Commissioner of Baseball Rob Manfred, and Randy Levine of the New York Yankees, for the invite,” Mr Trump said ahead of the game.

But it later transpired that Mr Trump had asked to come to the game.

“He called MLB and wanted to come to the game,’’ Atlanta Braves Ceo Terry McGuirk told USA Today. “We were very surprised. Of course, we said yes.”

Mr McGuirk also told the paper that the 45th president would enjoy the game in his own suite and not in the company of MLB officials or the team.

The seemingly braggadocious claim of a nonexistent invitation – coupled with the controversial participation in the Tomahawk chop – is just the latest in a long line of bizarre interactions involving Trump and baseball.

In 2004, during the wildly popular debut season of The Apprentice, Mr Trump and Melania landed their helicopter on the field at TD Bank Ballpark in New Jersey to throw out the first pitch for a Somerset Patriots game. Then they helicoptered off in equally dramatic fashion – during the sixth inning.

The Yankees had no such event scheduled. Then Mr Trump quickly backtracked and said he actually wouldn’t be throwing out the pitch because he was too busy.

The media had a farcical field day with the whole situation, a light-hearted distraction as the globe battled covid. “Trump Won’t Throw First Pitch At Yankees Game Because No One Asked Him To,” Vanity Fair gleefully proclaimed.

But things got more serious between Trump and baseball (and the Braves) this year when he called for a full-on MLB boycott when the organization decided in April to move its All-Star game out of Atlanta. The move was made to protest Georgia’s restrictive voting laws.

Tensions seem to have cooled enough, though, for Mr Trump to issue a statement before Saturday’s Game 4 in Atlanta saying he and Melania were “looking forward to a wonderful evening watching two great teams!”

Debate had already been swirling during the week about the name of Atlanta’s team and especially the “chop” as major league sports continues to change its attitude about the use and appropriation of indigenous imagery and culture. The Washington Redskins, for example, have temporarily changed their name to the Washington Football Team.

Days before Mr Trump’s attendance at the game, Fawn Sharp, president of the National Congress of American Indians, reiterated concerns about the performance of the “chop.”

“We have repeatedly and unequivocally made our position clear – native people are not mascots, and degrading rituals like the ‘Tomahawk chop’ that dehumanise and harm us have no place in American society,” she said in a statement.

The Independent has reached out to NCAI and the Trump Organization for comment.