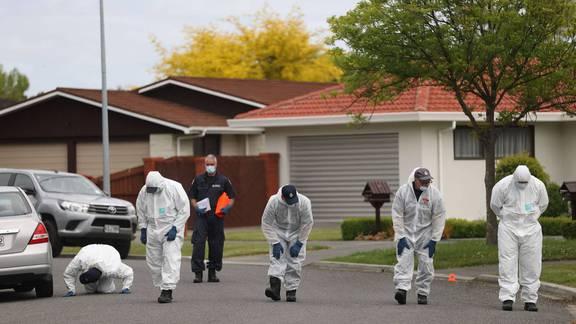 Three people have now been arrested following the fatal shooting of Christchurch teenager Connor Whitehead at a party in the city on Friday night.

Canterbury Police say two women aged 36 and 43 have now been arrested and charged with accessory after the fact to murder.

A 46-year-old man was also arrested on Saturday night for assisting the people directly involved in the shooting.

The trio are due to appear in the Christchurch District Court today.

The arrest of the women follows that of a 32-year-old man at a Burnside home last night following a three-hour stand-off at Dunster St property.

Screams and police dogs’ barks were heard from within a Christchurch property prior to the man’s arrest.

Whitehead, 16, died in Casebrook on Friday night after what police have described as a firearms incident. The Burnside High student died outside a teenage party on Friday night and was shot outside the property.

A statement on behalf of his family said they are devastated by his death and still trying to come to terms with what has occurred.

“We are in shock and want answers about what happened to our beloved son, brother, and friend. The magnitude of this senseless loss hasn’t begun to sink in.

“Connor was dearly loved, and his passing has left a huge hole in our lives. He was a kind, talented and deeply loyal young man who had such a bright future ahead of him.”

They said Whitehead was in no way connected to, or affiliated with, the people who are responsible for his death.

‘We would like to thank emergency services for their response on Friday night and their ongoing support. “We are grateful for the outpouring of love and support we have received, and the generosity shown by everyone during this difficult time.

“We ask for privacy at this time as we grieve and process the tragic loss of Connor.”

Reeves said there was still one more person they were looking for connected with Whitehead’s death.

“Officers continue to investigate this incident and are actively seeking one other person we believe was involved in Connor’s death.

“That person is aware they are being sought and we encourage them to come forward and speak with police,” she said.

Whitehead had attended the party with friends and was outside getting some air, according to his father James Whitehead.

James Whitehead told Stuff that his son wasn’t aware of the commotion when he walked outside, but then his friends saw people crowding around him on the ground at about 11pm.

A homicide investigation was launched after the shooting and the first person arrested in relation to the shooting was taken into custody on Saturday night, charged with accessory after the fact to murder.