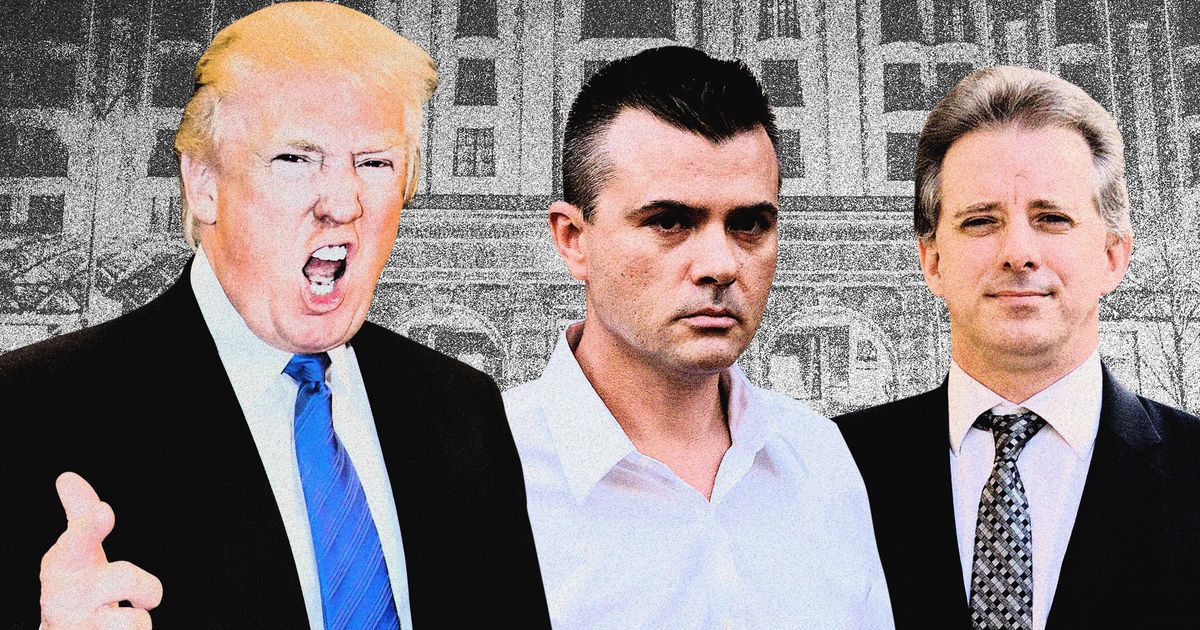 Christopher Steele, the former MI6 spy who compiled the notorious dossier during the 2016 campaign alleging ties between Donald Trump and Russia, made a splash a few weeks back when he gave his first interview about it. Steele described his professionalism as an intelligence-gatherer to George Stephanopoulos of ABC News and then doubled-down on some of the dossier’s most salacious allegations, asserting, among other things, that the infamous “pee tape” involving Trump may be still out there, just waiting to be found.

Since BuzzFeed published Steele’s reports in 2017, many of the dossier’s key claims have failed to materialize or have been shown to be false. But this week, it may have been dealt a death blow when the operative used by Steele to gather material for the dossier was indicted.

On Thursday, John Durham, the special counsel appointed to investigate the FBI’s probe into ties between Trump and Russia charged that operative, Igor Danchenko, with lying to the FBI about his work on the dossier and allegedly fabricating some information that appeared in it. A lawyer who represented Danchenko, a one-time analyst at the Brookings Institute, said at a court hearing that his client planned to enter a plea of not guilty but a judge told him to do so at a future arraignment. There is no question that Durham’s inquiry is viewed by some with suspicion. After all, he was appointed to his post by William Barr, Trump’s attorney general. And from the start, he seemed to tip his hand politically by publicly disagreeing with the finding by the Justice Department’s Inspector General that the FBI had a legitimate basis to open an investigation into possible collusion between the Trump campaign and Russia.

Still, it’s hard to imagine a turn of events with more dire consequences than the new indictment for Steele, the dossier, and Fusion GPS, the investigative firm run by two ex-Wall Street Journal reporters that hired the ex-spy on behalf of Hillary Clinton’s campaign and promoted his reports to the media. The charges against Danchenko also may force a reckoning that some journalists who had embraced the dossier had hoped to avoid — an examination of their reporting about it and their ties to operatives-for-hire.

Steele appears to have staked his reputation on the veracity of the reports he received from Danchenko. According to Crime in Progress, the book written about the dossier by Glenn Simpson and Peter Fritsch, the founders of Fusion GPS, the former spy never disclosed Danchenko’s name to them but instead described him as one of the most talented collectors of intelligence with whom he had ever worked. In Durham’s indictment, however, Danchenko, comes across more like the type of paid informant often found in the world of private spying — one who tells their employer what they want to hear.

According to those charges, he supposedly fed Steele some information that did not come from Kremlin-linked sources, as the dossier claims, but was gossip he picked up from an American public relations executive with Democratic Party ties who did business in Moscow. In 2016, the indictment states, the manager of the Ritz-Carlton in Moscow gave that executive a tour of the the hotel’s presidential suite and, soon afterward, Danchenko took a selfie of the executive and himself at the hotel.

A few days later, Danchenko flew to London to meet with Steele who then wrote a report that described the hotel’s suite as the setting for the “pee” tape, citing Ritz-Carlton employees as some of the sources for that information. The American executive who had met with those employees told the FBI they never mentioned anything salacious to him, the indictment states.

A spokesman for Steele’s firm, Orbis Business Intelligence, declined to comment on the charges against Danchenko.

The fallout of Danchenko’s indictment for Fusion GPS and journalism are also significant because he is also charged with lying to the FBI about a matter central to news accounts about dossier. Those reports identified a real-estate broker named Sergei Millian as a key but unwitting source of information for Steele’s reports, including claims of a long-running conspiracy between Trump and the Kremlin. He was also cited in news accounts as one of the sources who claimed there was a pee tape.

Millian, who was born in Belarus, first drew the attention of Simpson and Steele in mid-2016 when he was quoted by a Russian news outlet as saying he did a lot of business with the Trump Organization and knew about Trump’s taste for young Slavic women. Trump’s personal lawyer at the time, Michael Cohen, denied the claims but Danchenko told the FBI in 2017 interviews that became public last year that Steele had dispatched him in mid-2016 to clandestinely approach Millian with the aim of getting information from him. Meanwhile, during the 2016 campaign, Simpson tried to interest reporters in doing articles about Millian, claiming he had dug up material to suggest he might be a Russian operative. (When I worked at the New York Times, Simpson provided me with material about Millian though I never wrote about him.)

But it was after Trump’s election and BuzzFeed’s publication of the dossier that Millian’s name resurfaced with a vengeance. In early 2017, The Wall Street Journal first reported that he had been an unwittingly but key source for some of the dossier’s most explosive allegations. including one contending that there was a long-running conspiracy between Trump and the Kremlin. The newspaper’s scoop was unusual from a journalistic perspective because while publications typically require reporters to have two sources for an article, the Journal article only cited one unnamed person as the source for its information about Millian. Soon afterward, other outlets including the Washington Post ran stories describing Millian as the person identified in Steele’s dossier as “Source D,” a figure whose information was critical to it. Several reporters have said that Fusion GPS was then telling reporters that Millian was a key source for the dossier.

Millian vehemently denied ever speaking to Danchenko and Steele’s operative, in his interviews with the FBI in 2017, told agents that the former British spy had overstated the information he had given him. Danchenko also insisted to the FBI that he had spoken briefly by telephone on one occasion with someone whom he believed was Millian, though he added he was not sure it was him and that he had never met with Millian.

But Durham charged that Danchenko had lied to the FBI because emails indicated his supposed phone call with Millian had never taken place and that he never spoke to him at all. The indictment also claimed that Danchenko had even lied to Steele about his interactions with Millian by telling him that he had met with the real-estate broker when such a meeting had never occurred.

The prospect that information about Millian’s role in the dossier may have been fabricated sent some news organizations scrambling. The Washington Post, in its report about Danchenko’s indictment, stated the allegations related to Millian cast “new uncertainly on some past reporting on the dossier by news organizations, including the Washington Post.” In its account of the analyst’s indictment, The Wall Street Journal noted that it and other media outlets had identified Millian as a supposed key source for the dossier but the paper didn’t directly address the sourcing or basis for its 2017 article.

Simpson and Fritsch did not respond to requests for comment about Danchenko’s indictment. But by now, some things don’t need to be said. Simpson and Fritsch accepted Steele’s reports at face value and the former MI6 agent never took the trouble to speak directly to Danchenko’s sources to check on their claims. Meanwhile, some of the journalists who agreed to conceal their interactions with Fusion GPS and Steele when writing about the dossier may now be starting to regret those decisions.

Daily news about the politics, business, and technology shaping our world.


By submitting your email, you agree to our Terms and Privacy Notice and to receive email correspondence from us.