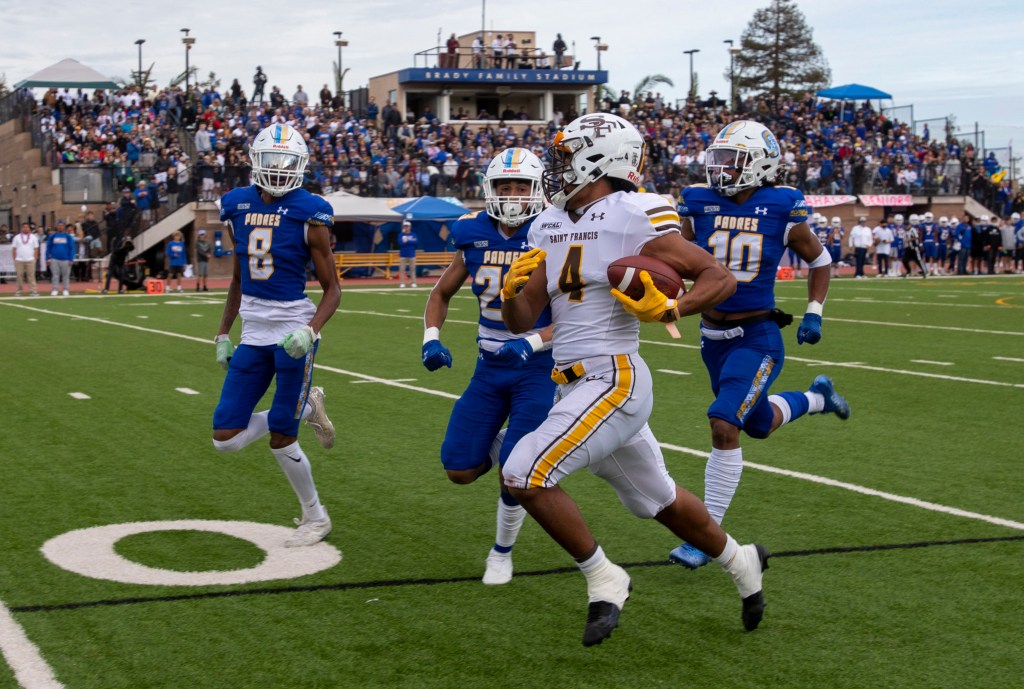 SAN MATEO — On Saturday morning, hours before the most anticipated high school football game in the Bay Area this season, the home team took to Twitter to announce that all the tickets had been sold.

If you wanted to watch Serra, ranked No. 1 by the Bay Area News Group, play host to second-ranked St. Francis for the West Catholic Athletic League championship, cable TV and streaming were the only options.

Those fortunate to attend witnessed one heck of a performance.

St. Francis senior Viliami Teu set a school record while leading the Lancers to a 44-21 victory that put an exclamation point on an undefeated regular season that included a landmark victory over De La Salle in September.

“It’s kind of like a Cinderella story, if you ask me,” Teu said. “It’s a blessing to be a part of this team.”

The 5-foot-11, 195-pound Teu finished with a school-record 344 yards (the previous mark was 333) and two touchdowns in 45 carries, capping the day with a 6-yard run across the goal line in the final minute.

For good measure, Teu ran over a defender as he reached the end zone.

When the game ended and the star of the afternoon was surrounded by reporters on the field, he noted that breaking the school record was something he added to his notebook during the week.

Teu has been special all season.

Humble, too, always thanking his line, deflecting credit to others even as he piled up massive rushing numbers against everyone, including De La Salle.

Saturday, he was the best player on the field from the opening quarter to the final seconds, rumbling behind a powerful offensive line.

“He was pretty unbelievable, although we’ve watched him do amazing things,” said St. Francis coach Greg Calcagno, whose team finished the regular season 9-0 overall and 7-0 in the WCAL. “He got 280 against Bellarmine in three quarters. We know he’s a very good football player, and our O-line is very good. But this was extra special because it was for a league championship, big crowd.

“We’re excited about what he can do.”

His 52-yard run led to another touchdown. This time, Camilo Arquette’s somersault across the goal line from a yard out made it 17-7 with 8:53 left before halftime.

St. Francis scored again when Joshua Perry threw a 56-yard strike to Andrew Adkison to put the Lancers in front 24-14.

“Juju opens up our entire offense for us,” Perry said. “When he’s averaging four to five yards a carry and 35 carries over a game, they’re going to try loading the box. We’ve got playmakers across the board and Andrew was our guy tonight. His speed is pretty unmatched on the field. It was great to see.”

St. Francis also got three field goals from senior Matthew Karic, including a 42-yarder early in the fourth quarter that stretched the lead to 37-21.

Lampkin and Gilmartin hooked up again later in the half from 31 yards to again shrink the deficit to three points, 17-14.

But this day — with more than 4,000 spectators on hand, including Serra students packed into temporary end zone bleachers — belonged to St. Francis.

“Definitely the better team won today,” Serra coach Patrick Walsh said. “I was proud we took it like men. We didn’t throw helmets and start fights and do stupid things. We got beat. Sometimes that happens in this league against great teams like St. Francis.

Now both teams will await the Central Coast Section playoff matchups that will be announced Sunday.

St. Francis will be the No. 1 seed in Division I.

Serra isn’t exactly sure where it will be seeded in the CCS’s point system. It could be a No. 4 or a 5 seed, Walsh said he has heard.

If that’s the case, St. Francis and Serra could meet in the semifinals rather than the championship game.

Others expect the Padres to be seeded No. 2.

Whatever happens, Teu plans to be ready.

“Back to work on Monday,” Teu said. “We’re just getting started, and I can’t wait.”