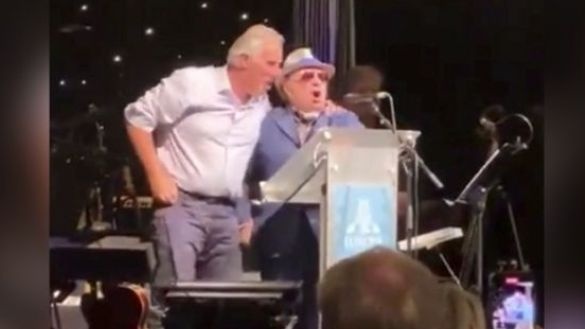 Northern Ireland’s Minister of Health is suing Sir Van Morrison after the singer branded him “very dangerous” over his handling of Covid-19 restrictions.

The legal action focuses on a high-profile incident at the Europa Hotel in Belfast in the summer when Mr Morrison, a vocal lockdown critic, took to stage and criticised Robin Swann.

The defamation proceedings also cite two subsequent incidents when the singer elaborated on his views on Mr Swann.

In the first, when he was challenged by a Sunday Life reporter about his initial comments, Mr Morrison was reported to have described the Minister as a “fraud”.

The second relates to content the songwriter uploaded on YouTube in which he addressed the Europa Hotel controversy. In that video, he again criticised the Minister and called him “dangerous”, albeit referring to him incorrectly as “Robert Swann”.

Mr Swann is being represented in the action by libel lawyer Paul Tweed. “Proceedings are at an advanced stage with an anticipated hearing date early in 2022,” he said.

The development was first reported by the Sunday Life on Sunday.

It is understood Mr Swann’s legal team sent a writ to the singer in June and followed that up with a detailed statement of claim in September.

It is understood Mr Morrison’s lawyers responded to the claim last month.

The Europa Hotel incident in June unfolded when a concert Mr Morrison was supposed to perform at was cancelled at late notice due to Covid-19 restrictions.

At one point while criticising Mr Swann on stage, Mr Morrison called up Democratic Unionist Party MP Ian Paisley from the audience to join him. Mr Paisley joined in with the singer in chanting that the Stormont Minister was “very dangerous”. Video footage of the episode went viral.

Mr Swann said Mr Paisley subsequently apologised for the incident. It is understood the Minister of Health is not taking legal action against the North Antrim MP.

Mr Morrison, a Belfast-born singer, has been an ardent critic of coronavirus restrictions, particularly those that prevented live music performances.

He recorded a number of anti-lockdown songs last year that he said were aimed at the UK government.

The lyrics included claims that scientists were “making up crooked facts” to justify restrictions that “enslave” the population.

Mr Swann subsequently responded to those songs in a piece written for Rolling Stone Magazine.

In that op-ed, Mr Swann described the singer’s claims as “bizarre and irresponsible”.

He said some of what he was claiming was “actually dangerous” and would provide “great comfort to the conspiracy theorists”.

Mr Morrison’s lawyers have been approached for comment. – PA