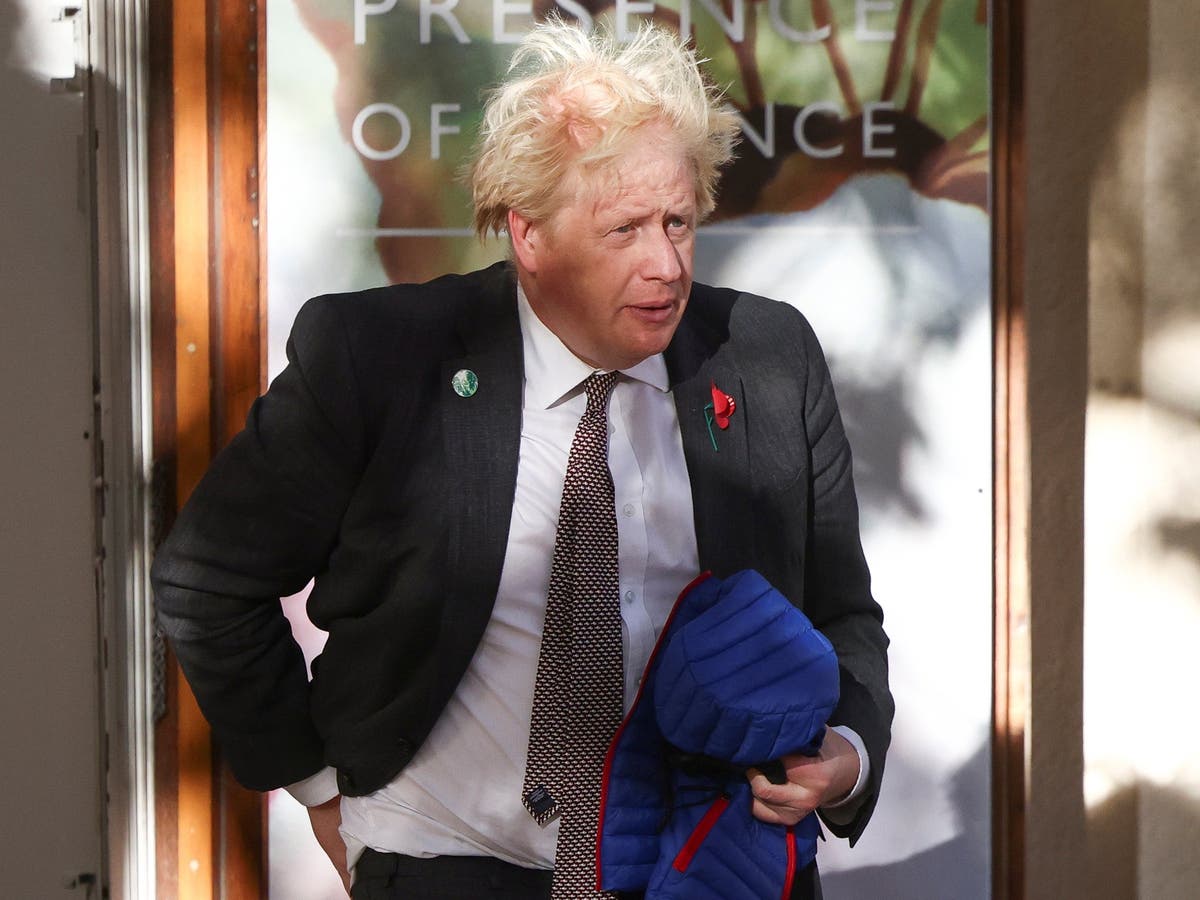 Boris Johnson is facing a civil service probe into claims his government threatened to strip funds from his MPs’ constituencies if they did not toe the line.

Backbenchers were allegedly told by Conservative whips the people they represented would lose out if they did not back the government. The Liberal Democrats have demanded Simon Case, the cabinet secretary, investigate.

It comes after a difficult week for the PM, who was forced into a screeching U-turn on plans to rip up the Commons standards regime.

His government had whipped MPs to back the scheme and also to put the suspension of Owen Paterson on the back burner, but realised in less than 24 hours it would be unable to force through its plans amid widespread backlash.

Some 100 Tories rebelled on the vote amid what one called “genuine rage” at the treatment of parliament.

Jacob Rees-Mogg, who as leader of the House was the face of the attempted reform, is now facing calls to resign. His position is “untenable”, claimed Labour’s Thangam Debbonaire on Sunday.

Starmer attacks Johnson as ‘in the sewer’ on standards

Sir Keir Starmer has claimed Boris Johnson is “in the sewer with his troops” and said he doubted the prime minister can help “clean up” politics.

The Labour leader, on the BBC’s Andrew Marr Show, said of Mr Johnson and the Owen Paterson case: “Instead of upholding standards, he ordered his MPs to protect his mate and rip up the whole system. That is corrupt, it is contemptible and it’s not a one-off.”

Asked about Mr Johnson’s future, Sir Keir said he was “angry” because the reputation of Britain and its democracy was being “trashed” by the PM.

He went on: “When there was sleaze in the mid-1990s John Major rolled up his sleeves and he put in place the Nolan committee on standards in public life – so he was the prime minister who said, ‘I will clear this up’.

“Boris Johnson is the prime minister who is leading his troops through the sewer – he’s up to his neck in this.

“I don’t think you or anybody else could with a straight face say this prime minister is the man to clean up politics and to have the highest standards in public life because he is in the sewer with his troops.”

Exclusive: All UK’s post-Brexit trade deals combined worth less than 50p per person

All of Boris Johnson’s new post-Brexit trade deals put together will have an economic benefit of just £3 to £7 per person over the next 15 years, according to the government’s own figures.

The tiny economic boost – amounting to just 0.01 to 0.02 per cent of GDP, and less than 50p per person a year – is dwarfed by the economic hit from leaving the EU, which the government estimates at 4 per cent of GDP over the same period, writes Jon Stone.

Jacob Rees-Mogg should resign a leader of the House of Commons over the Owen Paterson scandal, Labour has said.

What did Owen Paterson do? Everything you need to know about Tory lobbying scandal

#icymi – a full explainer on the Paterson vote

Boris Johnson’s government is mired in sleaze claims after No 10 tried to save Conservative Party MP Owen Paterson from suspension while seeking to rip up the Commons disciplinary process, writes Adam Forrest.

On Thursday Mr Paterson dramatically resigned as an MP after Mr Johnson U-turned and allowed a fresh vote on his suspension over a breach in lobbying rules, and retreated on plans to rewrite conduct rules.

So what was the Tory MP found to have done wrong? Why did the government U-turn? And how do the parties now agree on a disciplinary procedure following the saga described by Labour as a “sleazy mess”?

George Eustice has brushed aside a question on a cabinet colleague’s treatment of the parliamentary standards commissioner by claiming he was not sure what he actually said.

The environment secretary’s normally fluid responses stumbled somewhat when challenged by the BBC’s Andrew Marr, who asked him whether it had been right for Kwasi Kwarteng to suggest Kathryn Stone, the commissioner, should resign.

Mr Kwarteng made the comments on national television the morning after the vote to scrap the current standards regime. The business secretary suggested Ms Stone was no longer needed and should consider her position.

Mr Marr asked Mr Eustice whether this was a “decent and proper” way to treat a public servant who, he said, has now been given police protection due to hate messages directed at her following Mr Kwarteng’s comments.

Mr Eustice said: “Well I’m not sure exactly what you’re saying about what the business secretary said. Our view is that there was a panel that looked at this and obviously she makes recommendations and they go to a panel of MPs themselves to consider.

“There is a case for there to be an appeal process in that … That’s what we were trying to do.”

An English man arrested in Ireland on suspicion of making threats to kill a British MP has been charged.

The man, 41, from England, was detained in the Cork suburb of Douglas on Saturday.

The arrest was made as gardai executed a search warrant at a residential property.

Thangam Debbonaire has derided the government’s suggestion that no means of redress is available to MPs undergoing a standards investigation.

“In effect” an appeals process already exists, she claimed.

She told Sky’s Trevor Phillps on Sunday: “The standards committee reviews the evidence, they take further evidence if necessary, they can ask the standards commissioner to go back and look again.

“In [Owen Paterson’s] case they considered the evidence overwhelming. So there already is, in effect, an appeals process.

“We can always strengthen the process, of course. For over 300 years all we’ve ever done as parliament is strengthen that process.

“What the prime minister and Jacob Rees Mogg and his chief whip, what they tried to do last week was weaken it.

“The standards committee is, even now, reviewing the code of conduct for MPs, as is quite right and proper they do every parliament.”

Thangam Debbonaire, the leader of the House’s opposite number, said he had displayed an “extraordinary” lack of control during the Owen Paterson saga.

She claimed she would quit if she were in his shoes.

John Major was wrong to say the Owen Paterson affair during the week was “shameful” for the government and made parliament look bad, the environment secretary has said.

George Eustice said he disagreed with the former prime minister on a number of issues, adding “he’s not somebody whose cue I would normally take”. He added that the row over sleaze was a “Westminster storm in a teacup”.

He said: “The point is here, is, last week we tried to introduce an appeals system in the parliamentary standards process. I think there’s a consensus that there should be some sort of appeals system.

“The vote passed but there was obviously unease because other political parties said they weren’t at this stage willing to engage in that process.

“This inevitably ended up being conflated with the Owen Paterson issue so we took the decision not to proceed with that, but indeed to re-engage.”

The motion the government whipped its MPs to support last week itself conflated Mr Paterson’s standards breaches with overhaul of the system, by including in the same amendment a plan to put his suspension on the back burner and the proposed new scheme for tackling wrongdoing.

Pressed on why some 100 MPs failed to back the motion, and on whether the government was “in trouble on this issue” of sleaze, Mr Eustice insisted Boris Johnson’s team did not have a problem with its character.

He said: “I’ve been up here in Glasgow at Cop where some really big decisions are being taken, big, important commitments around the world on a big challenge like climate change.

“I think what we’ve seen is a sort of Westminster storm in a teacup, if I may say so. Yes, we made a mistake in bringing that forward in the way that we did so we withdrew it, but the overall principle, that you should have due process and a right of appeal in these types of situations, I don’t think anybody doubts.”

It would be “colossally stupid” to trigger Article 16 and suspend the Northern Ireland Brexit agreement, John Major has warned.

The former Tory prime minister branded the policy – thought to be under consideration by Boris Johnson – “absurd”.

It comes after Lord Frost, the UK’s Brexit negotiator, said the drastic course of action was “very much on the table and has been since July”, writes Jon Stone.