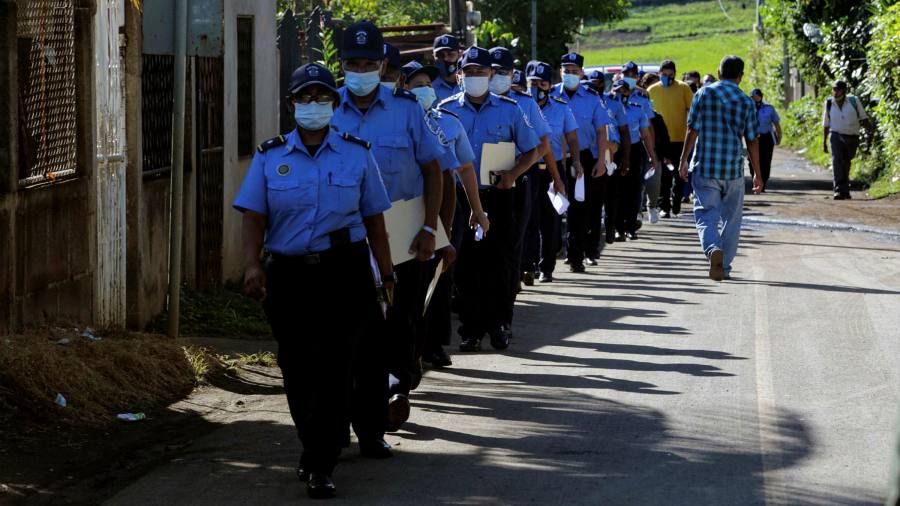 President Daniel Ortega is expected to secure a fourth consecutive term in an election in Nicaragua on Sunday condemned by the US and others as a sham after he jailed opponents.

Ortega, who first took power after the Sandinista Revolution that overthrew a US-backed dictator in 1979, aims to prolong a second presidential stint that began in 2007.

A recent CID-Gallup poll suggested that fewer than one-fifth of Nicaraguans support Ortega and his vice-president, wife Rosario Murillo. Yet activists and analysts say the government will claim victory on Sunday no matter what happens.

“Today there aren’t going to be elections, it’s going to be a sham that’s been happening under unprecedented repression,” said Vilma Núñez, president of the Nicaraguan Center for Human Rights (CENIDH). “There’s no one to vote for, nor a reason to vote.”

Sunday’s presidential ticket will feature Ortega, 75, against a handful of lesser-known politicians. Voters will also choose representatives in the country’s Congress. Governments around the world condemned his administration after he threw his main rivals in prison in a campaign of repression this year.

The US has also called the election a sham and is reportedly exploring further sanctions on officials. The EU has also imposed sanctions on officials for human rights abuses and undermining democracy. This week, Republicans and Democrats in the US Congress passed a bill calling for more punitive measures against the country’s leaders.

Denis Moncada, foreign minister, said at a voting station on Sunday that Nicaraguans would not be intimidated by threats or sanctions by foreign powers. He said the electoral process had been peaceful, stable and free, a video of his comments published on social media showed.

Nicaraguan civil society groups are calling on people to stay at home on Sunday and not vote. In recent days, 21 more people linked to opposition groups have been detained, said the Nicaraguan activist network Urnas Abiertas.

“There are so few ways of protesting left for people,” it said. “There’s more and more surveillance, there are arrests for putting up stickers . . . for painting on the walls.”

The deterioration of Nicaraguan institutions had happened over the past two decades and accelerated when Ortega took power again in 2007, Urnas Abiertas said.

The economy of Nicaragua, one of the poorest countries in the Americas, has shrunk since 2018, the year that government repression of large protests killed more than 400 people. The country also has one of the lowest Covid-19 vaccination rates in the region: just 5 per cent of its population is fully vaccinated, according to the Our World in Data database.

More than 200,000 Nicaraguans have left the country since the 2018 crackdown, according to Manuel Orozco, director of the Migration, Remittances, and Development Program at the Inter-American Dialogue. Many went to the US and neighbouring Costa Rica, with a large number of families back home relying on remittances.

Some fear that further consolidation of Ortega’s power will only serve to speed up that trend.

“More instability and repression will spark a new wave of migration — both south and north to the US border,” said Jason Marczak, director of the Atlantic Council’s Adrienne Arsht Latin America Center. “This is a pivotal moment for the US, EU and countries across the Americas to show that dictators will not be tolerated.”