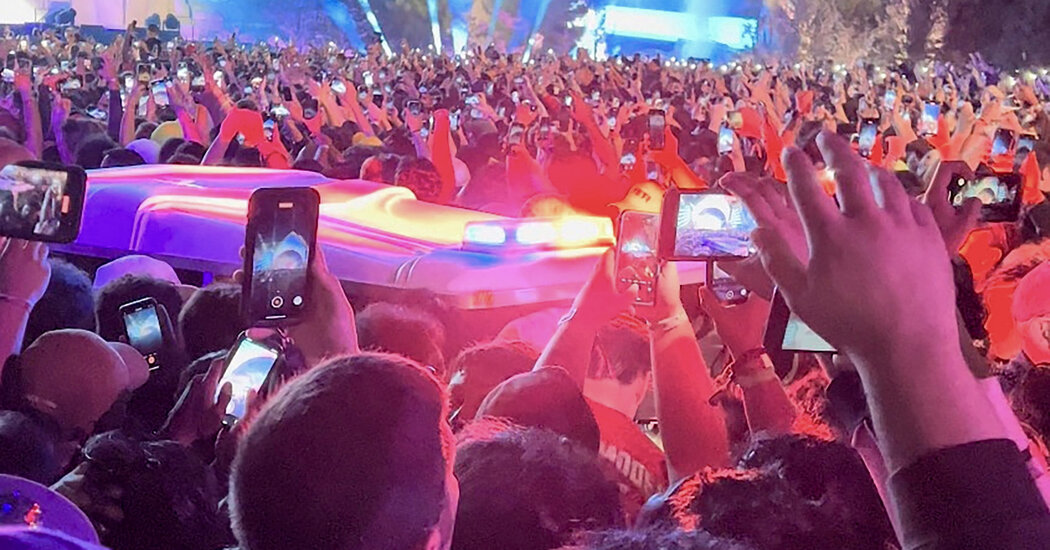 Away from the stage, chaotic scenes were playing out.

Madeline Eskins, a 23-year-old intensive care nurse who was at the concert, said that she lost consciousness and her boyfriend carried her out of the crowd. She awoke in an area where the injured were being brought and noticed a man who looked dead.

“I told the security guard that I am an I.C.U. nurse, please let me look at him,” she said. The man did not have a pulse, Ms. Eskins said. “His eyes were rolled in back of his head, his pupils weren’t reacting,” she said. “Then another security guard overheard that I was a nurse and he said, ‘Can you come help us?’”

She said she was taken to an area where three people were laid on the ground, all receiving CPR. Some of the medical workers did not appear to know how to check a pulse or properly conduct chest compressions, she said. “They looked terrified,” she said.

In the afternoon news conference, officials said some of the injured had been trampled, and Chief Peña said that the third-party medical contractor for the event had become “quickly overwhelmed.” More than 60 city ambulances responded to the event, he said.

Sami Anjum, 28, served as a field medic for the Astroworld Music Festival. He said that concertgoers were “noncompliant” and made it hard to reach those in need. “Many bystanders offered to help or directed the field medics to take certain actions but they did not understand the volume, variety, velocity, and variability of the medical emergencies we were being faced with,” Mr. Anjum said in an email.

Extremely crowded conditions at a concert are not unheard of, and some at the concert said that they did not realize that anyone had been seriously injured or killed until after they got back home.

The most common cause of injury and death in crowds is compressive asphyxia, when people are pushed against one another so tightly that their airways become constricted, said Steve Adelman, a lawyer and the vice president of the Event Safety Alliance, an advocacy group. This happens most often during a “crowd crush,” when the audience is packed together so tightly that people cannot move, but it can also occur during a stampede.