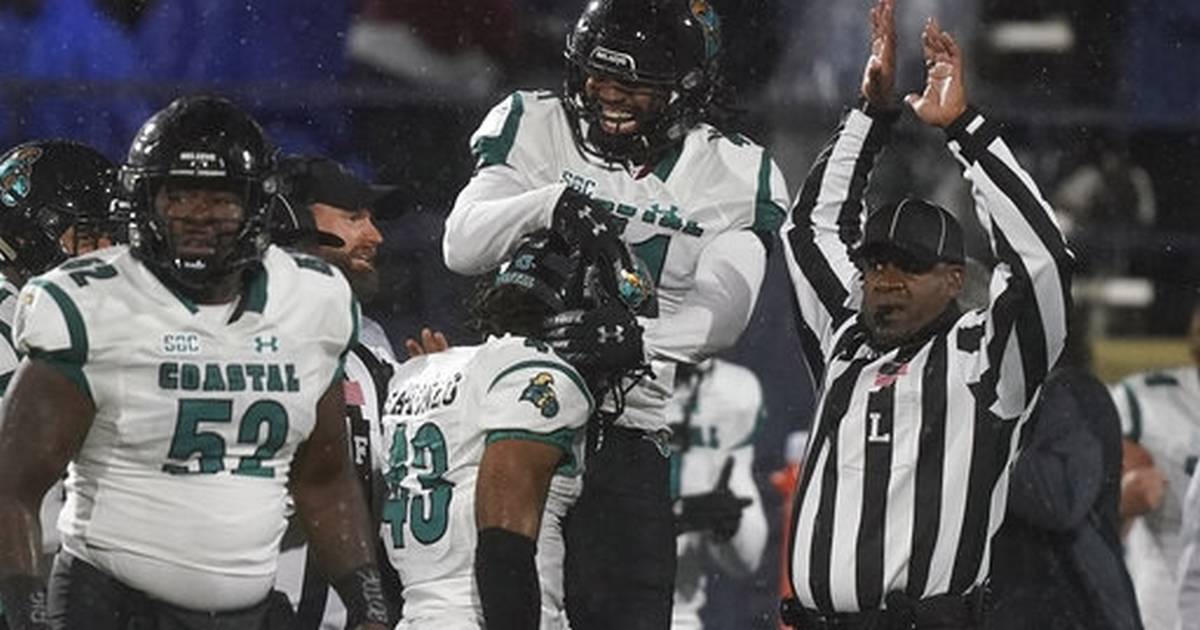 STATESBORO, Ga. — Backup Bryce Carpenter threw for 85 yards and a touchdown and ran for another score to help No. 21 Coastal Carolina beat Georgia Southern 28-8 on a rainy Saturday night.

The Chanticleers (8-1, 4-1 Sun Belt Conference) are tied with Appalachian State (7-2, 4-1) atop the East Division standings, but the Mountaineers are in the driver’s seat after a 30-27 series victory last month.

Coastal Carolina announced an hour before the game that starting quarterback Grayson McCall would not play. The school said McCall is out indefinitely with an upper-body injury. McCall is a redshirt sophomore who has thrown for 2,063 yards, 17 touchdowns and two interceptions this season. He leads the nation in passing efficiency and is third in completion percentage.

Carpenter, who entered with 19 pass attempts this season, connected with Kameron Brown for a 12-yard touchdown pass to open the scoring. Carpenter made it 14-0 with a 23-yard run, and Mason Shelton recovered a blocked punt and returned it 33 yards for a three-touchdown lead.

It was Alex Spillum’s second blocked punt of the season, after a block and TD recovery in the end zone against Kansas.

Carpenter was 13-of-20 passing for Coastal Carolina. Shermari Jones carried it 20 times for 96 yards and a TD.

Backup Cam Ransom was 5 of 10 for 64 yards, including a 6-yard TD pass to Beau Johnson early in the fourth quarter to put Georgia Southern on the board. Starter Justin Tomlin was intercepted once in 13 attempts.

Coastal Carolina: Although Georgia Southern is last in FBS by allowing 322.4 passing yards a game, the Chanticleers only put up 85 yards through the air while rushing for 220 against an Eagles defense that allows 155.

Georgia Southern: Todd Helton, who was fired by Southern California on Sept. 13, was hired by Georgia Southern on Tuesday and introduced at the school Thursday. He observed the game but is not making coaching decisions until after the season. He plans to evaluate players and coaches and begin recruiting while Kevin Whitley will continue as interim coach after replacing Chad Lunsford following a 1-3 start.