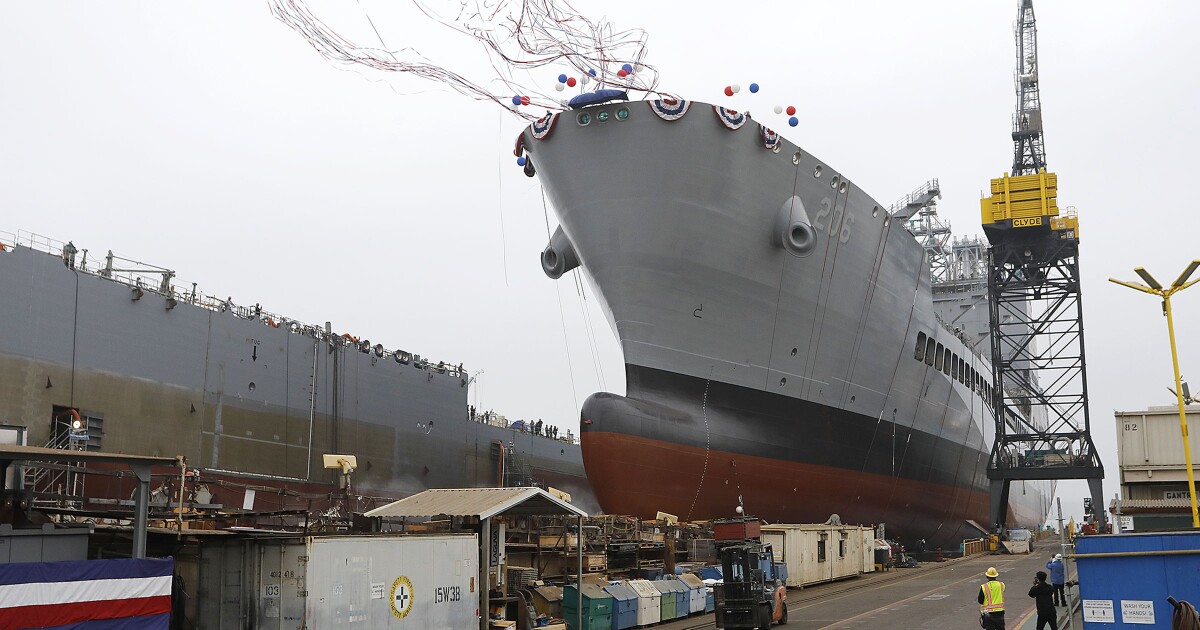 A huge new Navy fuel ship was launched into San Diego Bay Saturday bearing the name of Harvey Milk, the slain civil rights leader whose activism fed a social movement that decades later won the right for gay people to openly serve in the military.

In a centuries-old ritual, the 746-foot vessel slid down the ways at General Dynamics-NASSCO, close to where Milk served in the Navy in the 1950s until he was issued a less-than-honorable discharge because he was gay. At the time, he was the diving instructor on a submarine rescue ship.

Saturday’s celebration represented another chapter in the military’s reckoning with its past, when it routinely dismissed gays, lesbians and bisexuals because of their sexual orientation.

The Obama administration outlawed such discrimination in 2011 when it did away with “Don’t ask, don’t tell,” a policy under which gay people could serve, but only if they didn’t reveal their homosexuality.

Five years later, Ray Mabus, then secretary of the Navy, decided to name six new oiler ships after civil and human rights leaders, including Milk, who became the first openly gay person to be honored in such a way.

The $3.2-billion contract to build the ships went to NASSCO, which completed the first-in-class vessel earlier this year. That one is named after the late Congressman John Lewis. The other ships will be named after four other people who have also passed away — Supreme Court Justice Earl Warren, U.S. Attorney General Robert F. Kennedy, and women’s rights icons Lucy Stone and Sojourner Truth.

The vessels are essentially traveling service stations that span the globe, providing everything from fuel to fresh water, along with some cargo, to Navy surface ships at sea. The Navy has not yet said where the Harvey Milk will be based.

Several Navy leaders, including current Navy Secretary Carlos Del Toro, spoke movingly Saturday about the courage that Milk showed in the 1970s fighting prejudice and discrimination in the face of death threats. The political fallout was so bad that Milk predicted that he would someday be assassinated.

He and San Francisco Mayor George Mascone were shot to death in San Francisco City Hall on Nov. 27, 1978, by Dan White, a disgruntled former San Francisco supervisor. Milk’s body was discovered by fellow supervisor Dianne Feinstein, who is now a U.S. senator. Feinstein, one of the ship’s sponsors, was unable to make Saturday’s launch.

Del Toro told an invitation-only crowd that he was compelled to visit San Diego “not just to amend the wrongs of the past, but to give inspiration to all of our LGBTQ community leaders who served in the Navy, in uniform today and in the civilian workforce as well too, and to tell them that we’re committed to them in the future.”

He did not clearly acknowledge that Milk had been forced to resign as a lieutenant junior grade following two weeks of interrogation about his sexuality in 1955.

But the issue was candidly raised by Milk’s nephew, the president of the Harvey Milk Foundation in Ft. Lauderdale, Fla.

Stuart Milk said he discouraged an overture by the Navy to alter his uncle’s record to say that he had been honorably discharged.

“Let’s teach history and let’s teach about our flaws, let’s make sure that we don’t go backwards,” Milk said as he stood near the lower bow of the ship on a cloudy, misty morning.

He also spoke frankly about his uncle’s tumultuous political life, which began to fully emerge in 1972, after Harvey Milk moved to San Francisco’s Castro District.

Milk, a charismatic and theatrical figure who began calling himself the “Mayor of Castro Street,” grew frustrated and angry at the physical and verbal attacks aimed at gay people, not only in San Francisco but nationally.

He ran for a spot on the city’s board of supervisors, a job he didn’t land until his third attempt, in 1977. Milk soon convinced fellow supervisors to prohibit the discrimination gay people faced in housing and employment.

The victory came while Milk was fighting an attempt by John Briggs, a conservative state senator from Orange County, to convince voters to approve Proposition 6, which would have made it illegal for gay and lesbian teachers to work in public schools.

Briggs characterized gay people as degenerates, an attack that resonated with many voters. But Milk and his supporters helped defeat the initiative when it went before voters on Nov. 7, 1978.

Less than three weeks later, Milk was killed by White. He was 48.

Fearing that he would be assassinated, Milk had said in an audio recording, “If a bullet should enter my brain, let that bullet destroy every closet door.”

He was referring to gay people who felt that they could not disclose their sexuality.

Stuart Milk made reference to the quote Saturday, saying, “When that final bullet went smashing into his brain, Harvey left this world seeing all of us fulfilling our potential, being authentic, and making today … and his dream a reality.”

“It is not an exaggeration to say that many of us who are currently serving in public office would not have been able to do that without Harvey Milk,” said San Diego Mayor Todd Gloria, who is gay.

“He broke the rainbow glass ceiling.”

Fernando Lopez, executive director of San Diego Pride, said, “Many of the historically significant ways we have found to honor Harvey’s legacy have started and been fueled by San Diegans — from (an) award to a bench in Balboa Park, a Harvey Milk Diversity Breakfast, the first street named after Harvey Milk … and now the USNS Harvey Milk.

“These moments aren’t just about honoring one man’s legacy; they are about flipping a public narrative that LGBTQ folks can and should be celebrated, not denigrated. Moments like this are how we collectively claim our place in history.”

Murray-Ramirez, who helmed the letter-writing campaign, said, “This is a day for all the unsung heroes, our veterans who got thrown out just because they were homosexuals.”

The Associated Press contributed to this report.