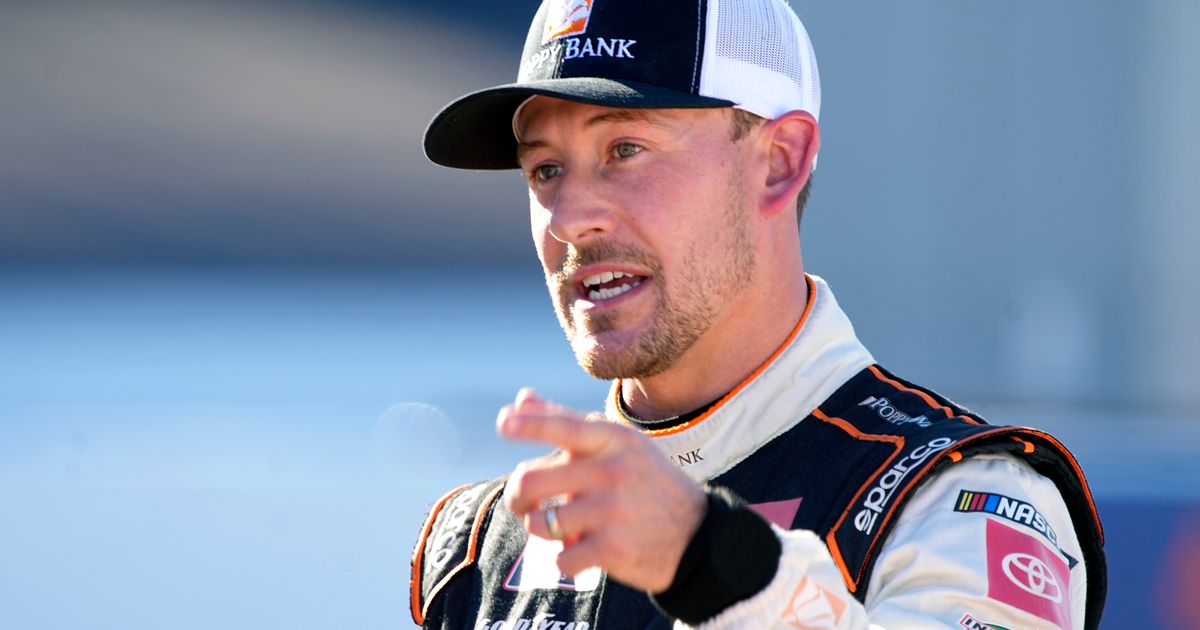 AVONDALE, Ariz. (AP) — Daniel Hemric made the first victory of his career one of the biggest NASCAR upsets — a championship-winning overtime stunner against the reigning champ.

Hemric beat Austin Cindric in a door-to-door sprint across the finish line Saturday night at Phoenix Raceway to give Joe Gibbs Racing its first championship of the weekend.

JGR races Sunday for the Cup title with both Denny Hamlin and Martin Truex Jr., and Toyota, which won the Truck Series championship Friday night, could sweep all three of NASCAR’s national series with another upset.

“DH!!! Let’s goooo!!!” tweeted Hamlin, who answers to “DH.” “So well deserved. Kid has worked his butt off and finally gets the biggest win on the biggest stage. Proud of you.”

Hemric, winless in 119 starts in the Xfinity Series and racing for the final time for Gibbs before moving to Kaulig Racing next season, was the fourth seed in the playoffs and the overlooked driver in the championship four. Noah Gragson is a showman, and Cindric and AJ Allemendinger were the two superior teams.

And it was going to be Cindric’s night as he led six times for a race-high 119 laps. The reigning champion was trying to close out his Xfinity career with a second consecutive title before his promotion next season to replace Brad Keselowski at Team Penske.

But a slew of late cautions stalled Cindric and granted Hemric two career-defining chances. Hemric was just about to catch Cindric when a caution froze the field and sent the race into overtime. In the two-lap sprint to the finish, the two raced side-by-side with everything on the line and Hemric won the race to the finish by less than a half-second.

“I blacked out, just knew I had to be the first one to the line,” Hemric said about the final two laps. “We were not going to be denied.”

Cindric finished second, but Team Penske won the owners championship. The driver’s title is awarded to the first of the championship four to cross the finish line.

Cindric, winner of five races this year and 11 the last two seasons, was annoyed to have the payoff stripped away because of three cautions in the final scheduled 20 laps and then a sprint to the finish.

“If everyone in the stands enjoyed it, it’s good racing,” Cindric said from pit road. “I’m very appreciative of the opportunity to race on such a big stage. It would have been awesome to finish this out.

“I felt like we had a dominant race car. I felt like we did everything right. Come up a little bit short, sometimes it’s like that way.”

Gragson, who won last week at Martinsville Speedway to make the finale, finished 12th. He banged hard against the wall in a desperate attempt for the win after driving his way through the field to third.

Allmendinger was 14th and was never in contention. In fact, his late spin brought out a caution that Allmendinger apologized for because he believes Cindric had the race won until that yellow.

Hemric’s car was last to the track and first to the finish line. The Joe Gibbs Racing hauler had a mechanical issue on the trip to Phoenix and did not arrive at the track until late Friday.

Hemric is a NASCAR blueblood in that he’s from Kannapolis, North Carolina, home of the late Dale Earnhardt. The win was his first in 207 NASCAR national races, and crew chief Dave Rogers noted Hemric will never again be asked when he’ll win his first face.

“You’ll never have to answer that stupid question again,” Rogers radioed as Hemric crossed the line.

Later in victory lane, Hemric said he was unusually emotionless as he grappled with the enormity of his victory.

“I don’t want people to think I’m not emotional because I’m probably one of the most emotional guys there are,” Hemric said. “When you go through as much, I think back immediately, honestly, to 2019 when I lost my ride. I felt like my life was unraveling before me.”

He will be teammates next season with Allmendinger because he’s taking Justin Haley’s seat in a promotion to Cup as Kaulig expands into NASCAR’s top national series.

Hemric had a Cup ride for Richard Childress Racing in 2019 but was replaced after one season. He got a job in the Xfinity Series with JR Motorsports last season, drove for Gibbs this year and will leave as the champion.

“”It’s about coming from nothing and making yourself all that you work for, that’s what it’s all about,” Hemric said. “This is the American dream, I’m living proof of it. Just unbelievable.”