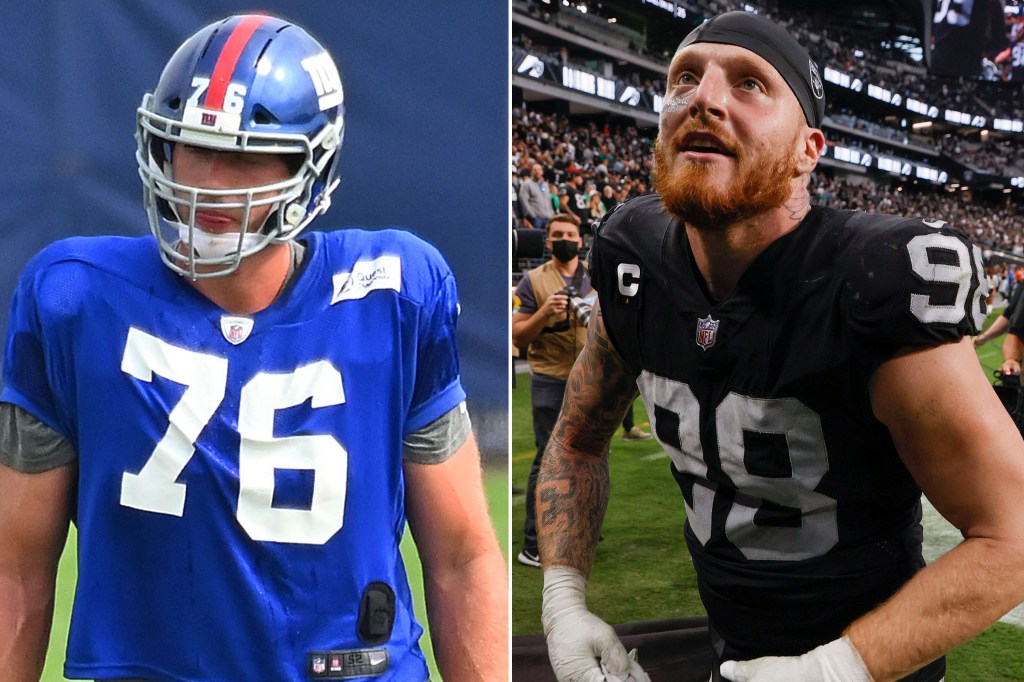 An inside look at Sunday’s Giants-Raiders Week 9 matchup in MetLife Stadium:

Um, this is not a matchup that favors the Giants. Solder knows the ropes as a veteran, but he is past his prime and will need help here.

Expect to see a tight end lined up next to Solder early and often. Crosby, a 2019 fourth-round pick out of Eastern Michigan, has developed nicely, with 17 sacks in his first two years. He has five sacks this season, including three in Week 6 at Denver.

“He’s a guy that can get after the quarterback,’’ Daniel Jones said. “He puts a lot of pressure on offenses to get the ball out on time and plays really hard. He’s got really good pass rush moves. He’s a hard guy to block.’’

The defensive scheme put in place last week by Patrick Graham was outstanding, and if his unit can execute with that efficiency again, the Giants have a chance. Where will the points come from, though? The expected return of Kenny Golladay should help, and Kadarius Toney should be healthy enough to make some plays. The Raiders are 28th in the NFL in run defense, but the Giants are once again without Saquon Barkley. Maybe a big rushing game from Daniel Jones?

M*A*S*H UNIT: The health of the Giants, or lack thereof, continues to be an overwhelming story, week after week. Wednesday, the Giants had eight players on their injury report with real physical issues (two were exclusively COVID-19 related). The Raiders had just two players on their list. Both were able to practice on a limited basis. One of them was nose tackle Johnathan Hankins, the Giants’ second-round pick in 2013. Is the ever-growing injury report a case of bad luck, bad information, a too-cautious approach, too much, too little? Each game, it seems, who is not playing for the Giants is a bigger story than who is. Something has to be done about this, because it severely compromises the chances for success.

Corner the market: At 6-foot-1 and 212 pounds, James Bradberry has excellent size for a cornerback. That is one of the reasons the Giants felt comfortable matching him last week against TE Travis Kelce (6-5, 256). Defensive coordinator Patrick Graham learned this from his days with the Patriots, when cornerback Aqib Talib would often be asked to deal with tight ends. This week, it’s Darren Waller of the Raiders, a beast to cover.

“We’ll probably have two to three people in man situations end up covering this guy, but I’m sure JB will get a chance at him at some point,’’ Graham said. “Anytime you’ve got a big corner, their skill-set working with receivers or going against receivers, and then you add that size element versus a tight end, I think it potentially helps us.’’

Carr alarm: Derek Carr is never mentioned among the elite quarterbacks in the league, probably because he has not risen to that level. Is he a true franchise quarterback? He is 11th in the NFL in passer rating at 101.2, is always an accurate thrower (67.7 percent) and two weeks ago completed 31 of 34 passes in beating the Eagles.

“He’s got great command,’’ safety Logan Ryan said. “That game against the Eagles was a clinic, an offensive clinic. You’ve got to give him his respect.’’

Special guy: Thomas McGaughey has been a special teams coordinator in the NFL since 2014, and whenever he opens his mouth, interesting and pertinent comments come out of it. He has a team-wide view of things. Here is what he said about rookie Kadarius Toney getting drilled on a punt return last week, contact that would have been avoided with the prudent decision to call for a fair catch: “It’s like anything else, I tell him all the time, sometimes you win, sometimes you learn, you never lose. He won in that situation because he’s learned a valuable experience. Don’t chase plays, let them come to you.’’