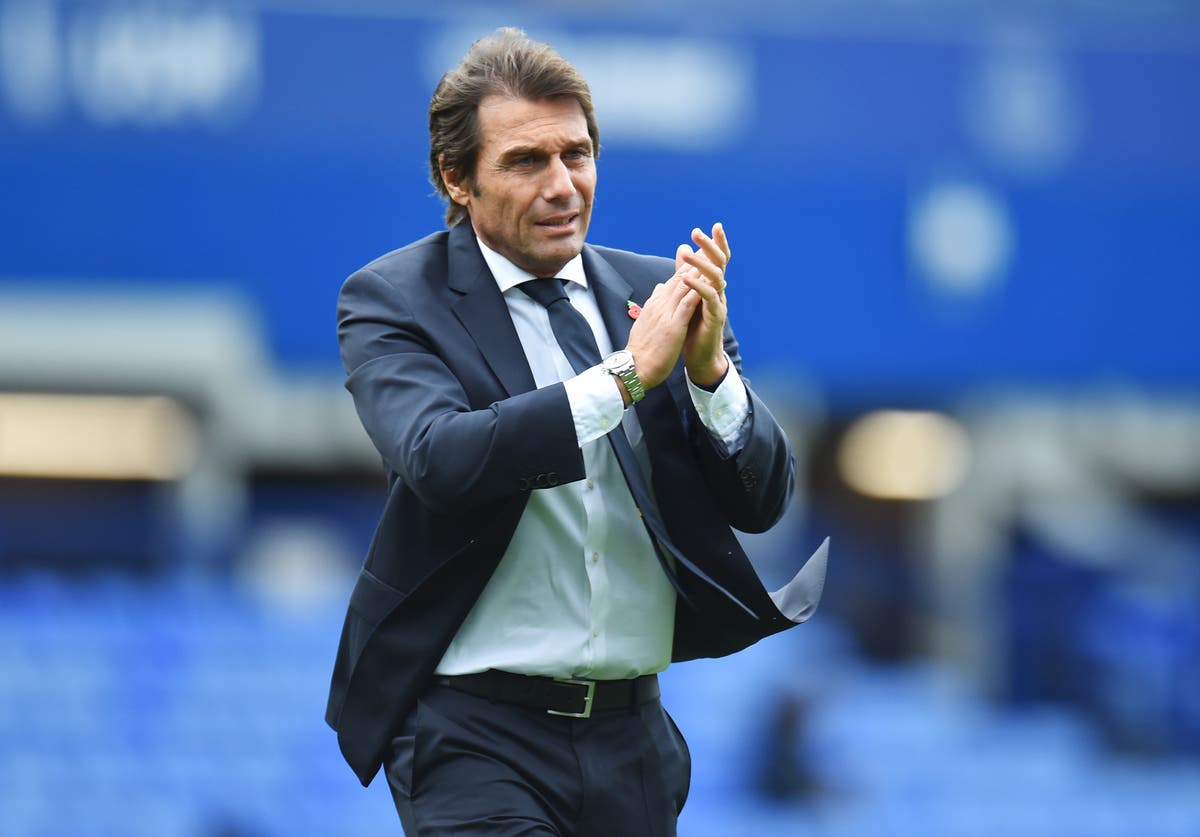 Tottenham Hotspur begin their new era in the Premier League today as manager Antonio Conte takes charge for the first time in a domestic setting, as they travel to Everton. The Italian boss oversaw a narrow win in the Europa League in midweek but his primary focus will be on improving league matters, with Spurs 10th after four defeats in their last six under former boss Nuno.

It won’t be routine against Everton though, with Rafa Benitez having overseen some good results already this season for the Toffees, though a recent drop-off sees them 11th after three straight defeats of their own.

Victory for either team will propel them into the top five or six, depending on results elsewhere across the rest of the weekend. Follow all the live updates from Everton vs Tottenham below:

We are underway at Goodison Park and the crowd is noisy as the game gets underway.

Everton vs Tottenham: Players on the pitch

The stadium stands in silence ahead of Remembrance Day. Then there’s also a round of applause for Walter Smith, former Everton manager who passed away recently.

The players are now ready for kick-off.

The pressure might be building inside those dressing rooms now – both teams need the points heading into the international break and neither of them want to be looking at a league table where they sit in anonymity halfway down it for two weeks. Of course Conte will get his first longer stint on the training ground with some players in that period, but many will depart on international duty – he’ll want an immediate showing from them today.

As he has shown at Chelsea and Inter most recently, he won’t care what a player’s reputation is before he arrives, or even what their best position and role was – he’ll find the ones who do the job he wants to see, and play them relentlessly if need be. That midfield in particular looks to have a position or two up for grabs if anybody shines on and off the pitch.

The same could be said for Everton in the absence of Doucoure!

Everton vs Tottenham; Incentive for victory

Still, despite a managerial change and criticism over both key players and the senior hierarchy at the club, it’s not all doom and gloom for Spurs.

A victory today will put them back above Manchester United for example, who thrashed them so comprehensively only a week ago. Three points would send Spurs fifth, or sixth if Arsenal pick up a point or better in their match against Watford. It’s not where Spurs want to be long term, but it surely suggests Conte can steer them back into a proper European competition over the next six months.

January transfers are an intriguing possibility, but there’s a lot of football to be played before that and a lot of points to be won or lost. He’ll demand it’s much more about the former, and closing the gap to West Ham in fourth.

Everton vs Tottenham live updates: Where are the goals coming from?

No secret that Kane has been misfiring in the league this term – just one to his name in nine appearances. In fact, Son Heung-min is the only Tottenham player to score more than once in the Premier League this season! Five for Everton have surpassed that solitary strike mark, with three players on three – but two of their top four scorers are unavailable today.

Spurs have been much the dominant side in this encounter during the Premier League era – they’ve won 27 meetings to Everton’s 9, with a further 22 draws between the teams. Last season this game finished 2-2 after a late Harry Kane equaliser, while earlier in the campaign the Merseyside club won 1-0 at Spurs, with Calvert-Lewin netting.

For his opposite number, Everton must match the minimum standards that Conte and Spurs set at Goodison Park. It’s not an ideal time to face the north London side, Rafa says, but it doesn’t matter: the Toffees must aspire to be just as aggressive and determined every week, regardless of opponent.

“We know that we will play against a very good team so cannot forget about that,” Benitez said. “Conte is a manager with experience and they have some good players so it will be difficult.

“Yes, maybe it is not the best moment because with a new manager they will have an extra motivation, but that is the difficulty of this competition. You have to compete against everyone, any time and we have to be ready.

“We saw against a lot of teams that we are capable to react and even in the last game that we lost (at Wolves on Monday), in the second half the team saw the commitment you are expecting, the reaction you are expecting so we can do it against Tottenham on Sunday.”

Tottenham players cannot claim to be surprised at what they will be expected to do: Conte’s teams are always the same in terms of application and demands on them, on and off the pitch.

“You have to start to think about football for many hours of your life to improve results, to win. To start to think that ‘OK, I want to win but I know that it means sacrifice, it means to suffer’.

“It means to work very hard. And if you start to think in this way, it means that you want to become a winner. Otherwise you continue to stay at your medium level.”

Rafa Benitez and Antonio Conte are in a similar situation. They are top-class coaches in charge of – at least for now – second-rate clubs. Their teams meet today at Goodison Park with Everton and Tottenham Hotspur desperate to break morale-sapping losing streaks in the league.

Conte’s arrival has lifted the spirits for Spurs, whose humiliating 3-0 defeat by Manchester United led to the departure of Nuno Espírito Santo. The Portuguese may have left but Tottenham’s problems remain. The new manager has inherited a mismatched squad, a host of underperforming players, an unhappy Harry Kane and, in Daniel Levy, a chairman whose position would surely be called into question if he didn’t own almost 30 per cent of the club. What Conte hasn’t inherited is any money. The expense of the stadium and the impact of the pandemic have left Spurs short of cash.

It does not look like a recipe for success. Conte left his last three club jobs after falling out with his bosses over transfers and budgets, writes Tony Evans.

Doubtless we’ll have plenty of Conte and Spurs chat as we approach kick-off, so let’s focus on the home team first.

No Doucoure, no Calvert-Lewin, no recent wins: Rafa Benitez is under a bit of a cloud for the first time really since the initial furore (and fume, in some cases) died down over his actual appointment. Those two players are utterly crucial to the plan and the midfielder in particular was excellent early on this season, but it’s a chance for Delph instead – his last league start was 11 months ago and his last full 90 in the league was one year and one week ago.

Given the expectation that Spurs will be a lot more energetic than they have been this term, it’s a big ask to step in and produce a huge performance, but that’s what the Toffees need to escape their recent slump.

Just one win in six in all competitions has contributed to them dropping into the bottom half of the league table.