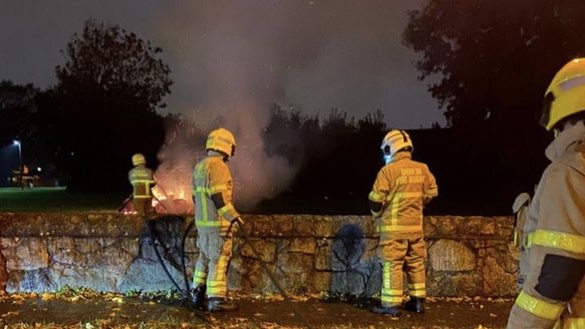 Dublin Fire Brigade has reported a “busy” Halloween night with bonfires being lit throughout the city from about 6pm onwards.

Killiney firefighters attended an incident where petrol was being thrown on to a bonfire while in Clondalkin gas cylinders were found near a bonfire. In Leopardstown smoke from a fire reduced visibility on the M50 for a period this evening.

Firefighters were also called to a bonfire that was spreading to trees in Rathfarnham while officers in Shankill dealt with a vehicle fire there. The fire was prevented from spreading to nearby vegetation.

Dublin Fire Brigade urged householders to remember candle safety. Those indulging in a few Halloween drinks are asked not to start cooking on the hob or turning on the oven while under the influence.

The brigade says that Halloween festivities tend to come to an end by about 2am on November 1st. So far tonight the brigade has dealt with just one injury involving a firework in Dublin.

“We are seeing a lot of fireworks this evening as we work, it is not too late to ensure that pets are kept in. Family pets are at risk of getting lost or injured on Halloween night. ”

In Cork city firefighters have dealt with “several incidents” this evening including some bonfires.