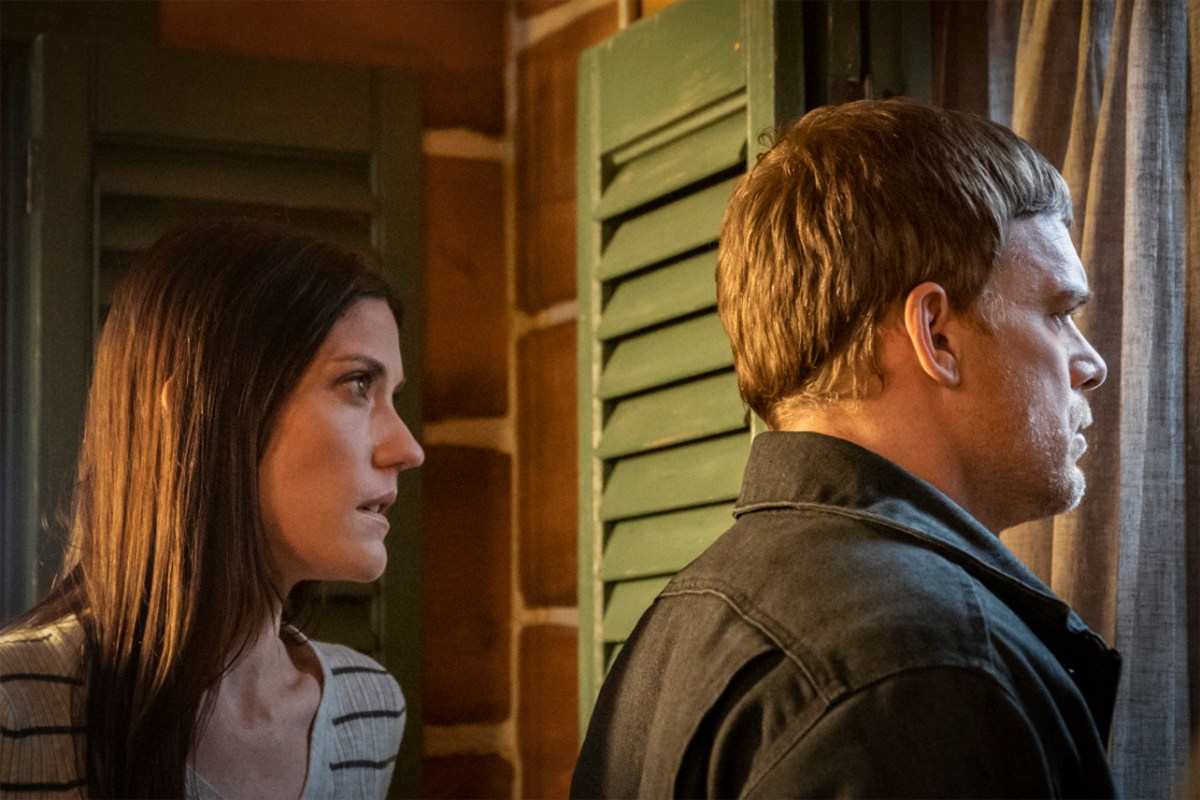 Dexter: New Blood premieres tonight on Showtime, finally giving Dexter Morgan (Michael C. Hall) a reprieve from that terrible Dexter Season 8 ending. Dex might still be living in a rustic cabin in the woods, but he is no longer a lumberjack. He is “Jim Lindsay,” an avuncular newcomer to the idyllic Upstate New York town of Iron Lake. He dates Julia Jones‘s nice police chief Angela Bishop, works at a local hunting and fishing store, and doesn’t murder people anymore! So what could possibly shake up Dexter’s perfect world? How about being haunted by his bloody past?

Dexter: New Blood is a new limited series reuniting Dexter stars Michael C. Hall and Jennifer Carpenter with the show’s original showrunner Clyde Phillips. Dexter, of course, was a hit series following a uniquely moral serial killer. Dexter Morgan has a sociopathic need to kill, but instead of targeting innocents, the forensics expert hunts vile criminals who escape justice. Needless to say, Dexter’s extracurricular pursuits earned him some pretty dangerous enemies. Over the course of eight seasons of television, Dexter and his “loved” ones were targeted by rival killers. Dexter: New Blood attempts to tie up some of the numerous loose ends of the finale. Namely, uh, what happened to Dexter’s son Harrison? When we last saw the tow-headed five-year-old  he was headed to Argentina with Dexter’s then-girlfriend (and fellow master killer) Hannah (Yvonne Strahovski). Dexter ultimately made the decision to abandon his son for the kid’s own protection.

But what happened to the serial killer’s son? How old is Dexter’s son Harrison now, anyway? Why is Deb (Jennifer Carpenter) back if she died in the Dexter series? And how did Dexter’s wife Rita (Julie Benz) die again?

Here’s everything you need to refresh yourself on before diving into Dexter: New Blood on Showtime tonight…

How Many Seasons of Dexter Are There? And How Did Dexter Season 8 End?

There were eight seasons of Dexter total that ran on Showtime between the years 2006 and 2013. It was nominated for Best Drama Series at the Emmys four times (but lost each time to a little show called Mad Men).

When the dust settled on Dexter Season 8, uber-popular character Deb was dead and Dexter abandoned every part of his former life in Miami to be a lumberjack in the Pacific Northwest. Fans did not experience closure. Hence Dexter: New Blood.

Note that Dexter: New Blood is considered its own limited series event, separate from Dexter the show. However it is a canonical continuation of the original series.

How Did Rita Die in Dexter?

Rita Bennett is introduced in Dexter Season 1 as the serial killer’s sweet, unsuspecting girlfriend. Rita is a single mom and the survivor of an abusive relationship, which makes it easy for Dexter to avoid an excess of intimacy in the beginning. The two are on and off for a few seasons until she discovers she is pregnant with their child. Dexter decides to marry Rita to take care of his son and her other two children.

In Dexter Season 4, Dexter comes into the orbit of the Trinity Killer, aka Arthur Mitchell (John Lithgow). Initially, Dexter intends to murder the serial killer, but he is fascinated by how the Trinity Killer balances his wholesome personal life and horrific crimes. The two become even more awkwardly linked until, naturally, a rivalry emerges. In the Dexter Season 4 finale, the two killers face off and Dexter manages to kill the Trinity Killer. However what he doesn’t know is that Mitchell has murdered Rita. He left her in a bath of her own blood with baby Harrison crying alone in a pool of his mother’s blood. It’s a scene meant to echo the moment that Dexter himself witnessed his mother’s murder as a toddler.

How Old is Harrison, Dexter’s Son, Supposed to be Now?

Harrison Morgan first appeared in the 2009 Dexter Season 4 premiere, which means he would be 12 years old today. However, that said, Harrison seemed to be aged up a bit between the show’s seventh and eighth seasons. He was about five or six in the final season of the show (when he should have been slightly younger).

Did Deb Die in Dexter? Why is Deb in Dexter: New Blood?

Yes! Deb did die in the last season of Dexter. She is shot while pursuing a serial killer named Oliver Saxon (Darri Ingolfson). While recuperating in the hospital, she falls into a coma. Dexter unplugs her from life support as a mercy and then buries her at sea. (Dexter Season 8 made choices!)

So what is she doing in the new limited series? A version of Deb haunts Dexter and attempts to give him advice. It’s a little schlocky, but can you do Dexter without Deb?

How Many Episodes of Dexter: New Blood Are There?

There are eight episodes of Dexter: New Blood. New episodes will release weekly, with the finale airing on December 26.

Where to steam Dexter: New Blood