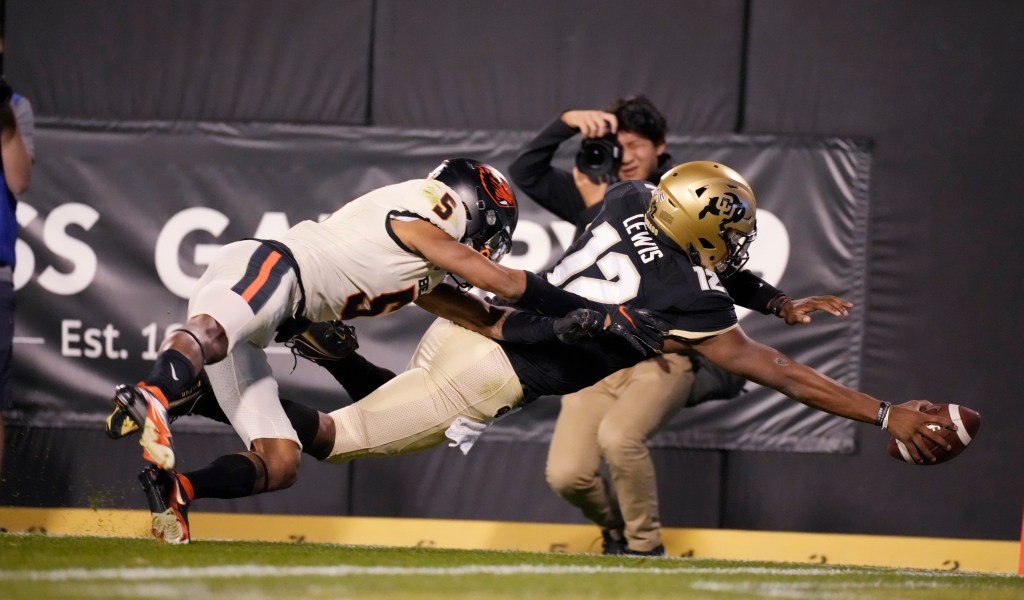 Even a record-tying, 60-yard field goal by Oregon State’s  Everett Hayes at the end of regulation didn’t take out the Buffs’ legs.

Their just reward was a wild, 37-34 double-overtime upset of Oregon State.

“Whew … what a game,” coach Karl Dorrell said. “I felt like our team grew up a little bit today. They rose to the circumstances and they didn’t panic. We’ll see where it takes us.”

“That’s the moment that all kickers dream about that, right there,” Becker said. “And I’m so proud of the way this team rallied.”

On the first possession of overtime, CU freshman quarterback Brendan Lewis turned a quarterback keeper into a 9-yard touchdown. He barely made it into the corner of the end zone.

Oregon State countered with B.J. Baylor’s 2-yard touchdown to send the game into the second overtime.

For the second game in a row, Lewis showed poise and leadership. Saturday, he completed 15-of-24 passes for three touchdowns and no interceptions. In his last two games, he’s completed 70% of his passes, with six TDs and no picks.

“I really think the whole offense is progressing as a whole,” Lewis said. “My confidence has skyrocketed, and when we converted plays early in the game, it feels like a breeze from there.”

For much of the game, the Buffs did everything they needed to do in order to pull the upset; they had a solid, creative offensive game plan and a defense — even without star linebacker Nate Landman — that was up to the task of slowing the Beavers’ potent rushing attack.

But late in the fourth quarter, the Buffs saw their 20-10 lead vanish.

CU had a seven-play, 72-yard drive, culminating in a 16-yard touchdown pass from Lewis to Montana Lemonious-Craig.

What appeared to be the winning TD pass came after Brendan Rice’s 11-yard score on a beautiful reserve was wiped out by a holding call near the goal line on wide receiver La’Vontae Shenault. Still, CU didn’t fold.

But, as time expired, Hayes booted his 60-yard field to send the game into overtime. His kick tied Mason Crosby for the longest field goal in Folsom Field history. Crosby connected from 60 yards against Iowa State on Oct. 16, 2004.

“Our mindset was just to go out there and score again,” Lewis said when asked if CU was deflated by the improbable kick. “That’s what we had to do. We all stepped up.”

With 5:30 left in the third quarter, CU appeared to be in complete control and looked to be in no need of late-game heroics.

On third and 3 from his own 40, Beavers quarterback Chance Nolan failed to gain a first down on a keeper when he was stuffed by strong safety Isaiah Lewis. The Beavers decided to go for it on fourth down, but Nolan, harassed by Carson Wells, wobbled an incomplete pass.

CU’s offense quickly took advantage, scoring in six plays to take a 20-10 lead. Lewis scrambled in the pocket before finding Rice with a 5-yard touchdown pass.

In concert with a game-time temperature of 73 degrees, CU came out hot.

Taking a cue from Ralphie in the first quarter, the Buffs stampeded out of the gate for a 10-0 lead. With Lewis completing 6-of-8 passes for 117 yards, the Buffs produced 144 yards off offense — their best first quarter of the season.

“We talked about coming out strong,” Dorrell said. “And our offense, really, is starting to hit its stride, really for the first time all season. This week and last week.”

The Buffs’ plan to attack the Beavers’ secondary was expected, especially after Lewis’ strong performance in CU’s loss at Oregon last week. Plus, the Beavers entered the game giving up 273.5 yards passing a game, ranking 113th in the nation.

CU’s first drive stalled at the OSU 10, but Becker connected on a 28-yard field goal. CU’s second drive — a well-executed, seven-play, 79-yard beauty — was capped off by a 43-yard TD pass from Lewis to a wide-open Daniel Arias.

The Beavers were poised to take a 14-10 lead midway through the second quarter, but Lewis intercepted Nolan’s pass at the Colorado 7 and returned it 38 yards.