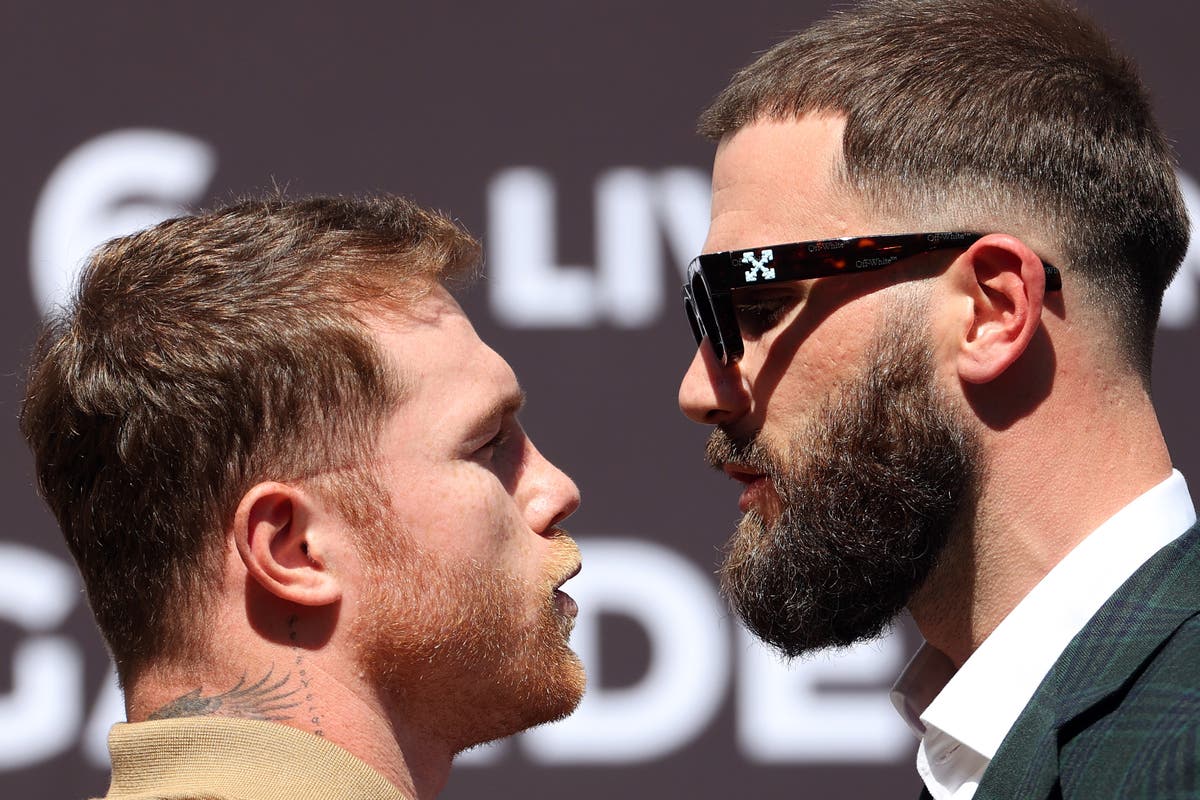 Undisputed status is up for grabs in Las Vegas tonight with all four super-middleweight world titles on the line at the iconic MGM Grand Garden Arena on the Strip.

Boxing’s biggest superstar and pound-for-pound no1 Saul ‘Canelo’ Alvarez is the overwhelming favourite to become just the sixth male fighter since 1988 to hold all four major belts in the same division.

The Mexican four-weight world champion has been in possession of the WBA and WBC belts since beating Callum Smith last December, while he added the WBO version with a brutal win over Billy Joe Saunders back in May.

Now all that remains is the IBF strap that has belonged to Caleb Plant since 2019, successfully defended on three occasions.

The American is a huge underdog in his quest to inflict just a second career defeat on the great Canelo, though he does not lack confidence and got under his rival’s skin during a fiery build-up to tonight’s showdown.

Follow Canelo vs Plant with Standard Sport’s LIVE blog below!

Before Salvatierra vs Diaz, Jose Antonio Meza took a shock decision on the cards against Jose Gomez.

Not too long now until the start of tonight’s televised pay-per-view undercard fights.

In the early prelims, Mexican flyweight Jan Salvatierra is currently going up against Fernando Diaz in an entertaining tussle.

Porter: If anyone can beat Canelo, it’s Plant

Shawn Porter – who battles Terence Crawford for the WBO welterweight title in Las Vegas later this month – acknowledges that Caleb Plant needs the performance of a lifetime to overcome Canelo tonight, but – like Andre Ward – believes he is capable of pulling off the shock.

“If this fight wasn’t Canelo Alvarez, Caleb Plant has ten fights, but beating this one guy, beating Canelo Alvarez puts him in the Hall of Fame,” Porter said.

“He’s got to use his power. I do know he’s got power that’s overlooked and we will see what happens.

“I think if there is somebody in the boxing world that can beat Canelo, it will be Caleb Plant.”

Canelo vs Plant tale of the tape

Here’s how both fighters stack up for tonight’s main event, with Canelo’s details first…

The whole of Mexico will surely be behind favourite fighting son Canelo tonight.

The four-weight world champion would love to make it a double triumph for his country this weekend as compatriot Sergio Perez also races for Red Bull on home turf at Formula One’s Mexican Grand Prix at the Autódromo Hermanos Rodríguez in Mexico City tomorrow evening.

“The fact that I can make history this weekend along with Checo (Perez) is very motivating for me,” Canelo said.

“My goal is to make this an unbelievable weekend for Mexico.”

Perez qualified fourth on the grid this evening, behind the Mercedes pair Valtteri Bottas and Lewis Hamilton and Red Bull team-mate Max Verstappen.

Canelo: My goal is to be an all-time great

Meanwhile, Canelo has his ambitions rooted firmly in etching his name into the sport’s history as an all-time icon…

“The goal is to be an all-time great,” he said. “I’m so proud of the journey I’ve taken to achieve that. I’m not going to stop until I’ve tried my best to reach that goal.

“Even harder than getting to the top is staying there. That’s why I try to get better each and every day. That’s what I’ve been trying to do from my first fight up until now.”

“I have to get the job done by any means necessary,” he said. “That’s what me and my team have done so far to get to this point.

“Whether it’s boxing or in life, I’ve gotten here by any means necessary. I had opportunities to bow out, and I haven’t.

“I’ve been the underdog before. It’s a place I like to be. I like people rooting against me. It gives me extra motivation. But when you’re fighting for undisputed status, you don’t need much more motivation than that.”

There are those, however, that believe Plant is capable of producing the sort of incredible, career-best performance that it will almost certainly take to emerge victorious tonight and walk away with all four super-middleweight titles.

Former two-weight world champion Andre Ward is one such man.

“I’m not a believer when you face a guy that’s powerful or a guy that’s supposed to have punching power you’re [supposed to] avoid him and being perfect for 12,” he said.

“What I mean by that is that sometimes you gotta go to that power and smother it.

“You gotta let them know, whoever it is, hey, you can get hurt, too.

“Caleb is a guy that has more power than they realise.

“I think he’s physically strong. I just think it’s always crazy until you do it. It’s easy for fans to choose – the easy pick is Canelo because of his history and everything he accomplished.

“But I’ll support Caleb, win, lose, or draw. But I think he has a great opportunity to go out there and shock the world. He just needs to put his mental on and make it happen.”

Most in the boxing fraternity are obviously plumping for a comfortable Canelo win tonight.

“I’m gonna go with Canelo on points because of the reason of being Canelo,” he said this week.

“I know how hard it is to get a decision, what tricks they might play leading up.”