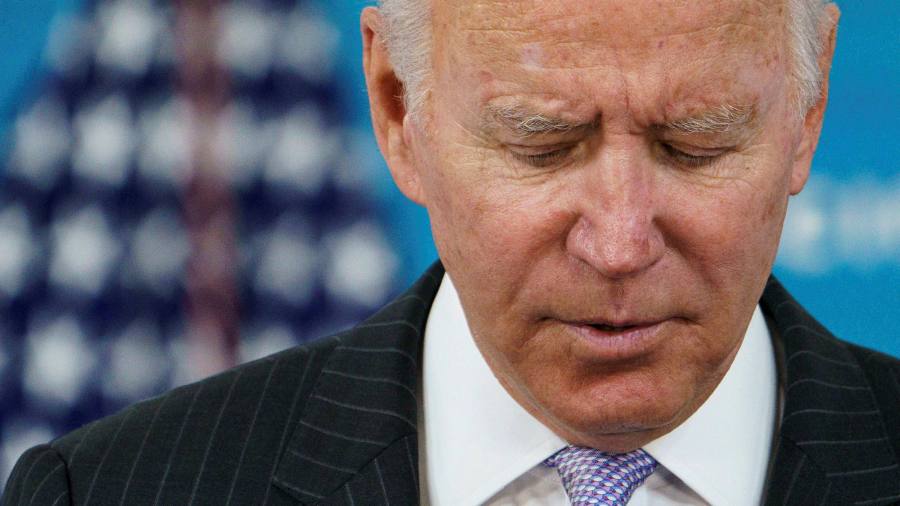 Joe Biden declared “we are just getting started” after the US House of Representatives passed his $1.2tn bipartisan infrastructure bill after months of wrangling.

The US president vowed to pass a larger $1.75tn package to invest in the social safety net in the coming weeks.

But despite scoring a much-needed legislative victory, Biden is struggling to revive his political fortunes after voters delivered a sharp rebuke to his party last week, raising fresh doubts about the effectiveness of his leadership.

Republicans on Tuesday recaptured the governorship of Virginia in an upset that, alongside strong GOP performances in local elections elsewhere, sent shockwaves through the president’s party. The Democratic incumbent governor in New Jersey — a state Biden won by 16 points last year — narrowly eked out a victory.

Now, a party that has for months been divided over the contents of its twin spending bills on infrastructure and the social safety net is facing another schism — this one over whether the president’s failure to deliver a progressive agenda is to blame for his tanking ratings, or whether it is that very progressivism that is alienating more moderate voters.

Abigail Spanberger, a moderate Democratic congresswoman from Virginia, made headlines this week when she blamed the president for misjudging what the public put him in office to do.

“Nobody elected him to be FDR, they elected him to be normal and stop the chaos,” Spanberger told the New York Times, in a reference to Franklin D Roosevelt, the transformative Democratic president of the 1930s and 1940s whose big domestic reforms reshaped the US economy.

Asked about the congresswoman’s comments, Biden told reporters on Saturday: “I don’t intend to be anybody but Joe Biden. That’s who I am.”

The president’s approval ratings have been falling for several months. Alarm bells started ringing in August for Democrats, when Covid-19 concerns, inflation worries and the congressional stand-off were compounded by the chaotic Afghan withdrawal. His poll numbers plunged to the lowest level of any recent president except for Donald Trump.

Since then, Biden’s approval ratings have fallen further still — to 42 per cent in October compared with 57 per cent when he was sworn in, according to Gallup — as his inability to force a timely compromise in his party has bred frustration and indifference among voters.

Some commentators argue that while Democrats pored over the contents of their sweeping spending packages, they neglected to notice more pressing concerns among voters, such as inflation. The latest official figures showed consumer price growth hovering near a 13-year high, as CPI rose 5.4 per cent in September compared with a year ago — and Republicans have argued that Biden’s sweeping spending bills could lead to even higher prices.

“[Democrats] weren’t attuned enough to the warnings about this being a lot of money and it might be inflationary,” said Charlie Sykes, an anti-Trump Republican who is editor-in-chief of The Bulwark. “I think that seemed to have caught them by surprise when it shouldn’t have. People always like free stuff . . . until they think it might be too much.”

The results in Virginia and elsewhere have revived haunting memories of the early years in office for fellow Democrats Bill Clinton and Barack Obama, who suffered similarly sharp whiplashes followed by heavy defeats in the ensuing midterm elections.

Democratic strategists believe the US president needs to be far more forceful and effective in rallying his party towards a compromise on Capitol Hill, selling his plans to the US public, and in fending off attacks from Republicans.

Biden, a longtime legislator who spent more than three decades in the Senate, took a more hands-on approach in eleventh-hour talks to secure the deal on infrastructure late on Friday, calling progressive lawmakers directly to make his case. The president said on Saturday that he would start travelling the country to sell the American people on the merits of the infrastructure bill this week.

“The policies of the Democratic party, that are in general popular, are being weaponised and repackaged against them,” said Kurt Bardella, a former Republican congressional aide who switched parties and now advises the Democratic National Committee and Democratic Congressional Campaign Committee. “There needs to be a full-throated, no-holds-barred response to that.”

So far, the White House has attributed the Democrats’ poor performance to Americans being upset about the lingering pandemic, and economic matters such as high petrol prices — a broad sense of malaise rather than a rebuttal of Biden’s policies or political strategy.

Bob Shrum, a veteran Democratic political strategist at the University of Southern California, says those factors may well be resolved by next year. “There is a chance that people’s perceptions will be very positive. What will matter is where we are on the economy, where we are on Covid, where we are on inflation,” he said.

But it could take time to reverse those negative feelings if Biden’s poll numbers are a guide. A CNBC survey in October showed that voters disapproved of Biden’s handling of the economy by 14 percentage points, compared with a 5 percentage point deficit in July.

“The overarching narrative is of an American public that is hurting financially and whose worries are dragging down opinions of the party in power,” said Jay Campbell, a Democratic pollster.

Tom Daschle, the former Democratic Senate majority leader, said Biden had discovered that even the White House had “limited” leverage in battling such forces.

“I think the level of fatigue that I have witnessed across the country is as great as I’ve seen it, I think, in my memory,” he said. “You can bring people down to the Oval Office, you can use the media, you can cajole, you can plead, but at the end of the day there are only so many tools in the box.”